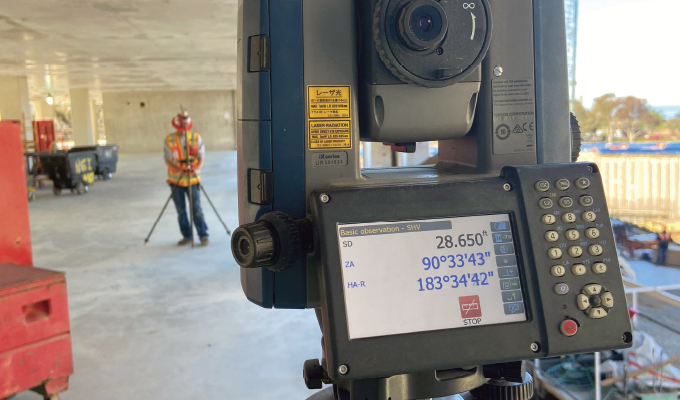 When A.O. Reed took on the project to provide HVAC design/layout/install services for University of California San Diego’s (UCSD) new Theater District complex, they came with a progressive game plan in mind. Brandishing a host of strengths in Building Information Modeling (BIM), they streamlined and enhanced the design workflow, then, turning to a robotic total station, nearly quadrupled the layout speed of the job. The company, though steeped in a 100+ year history, knows when tradition should rightly give way to progress.

Founded in 1914 as a small, family-owned plumbing business and incorporated at the outset of the Great Depression in 1929, A.O. Reed has proven it has what it takes to both survive and thrive. Today, the San Diego-based company employs close to 500 people and has established itself as the preeminent HVAC specialist in Southern California and beyond. The scope of its projects has also grown over time, going from small residential projects to some of So Cal’s largest municipal and state university expansions—including the one at UCSD, according to Matt Borg, Reed’s detailing manager for plumbing and piping.

“Formally known as the UCSD Theater District, the project is actually a complex of five new multi-level structures ranging in size from nine stories up to 21,” he says. “It will feature more than 800,000 square feet of added residential space, providing beds for an additional 2,000 students, as well as 105,000 square feet of non-residential space to accommodate administrative functions, five additional classrooms, a 480-seat lecture hall, meeting facilities, dining and retail, and parking for 1,200 vehicles—an increase of 360 spaces over pre-construction parking. We started detailing that about a year ago, and we will be on that job for at least another 18 months.”

The detailing to which Borg refers is actually Reed’s BIM-based work. He says that they model and coordinate all of their sheet metal, plumbing and piping systems using Autodesk Revit and Fabrication, then coordinate with other trades using Navisworks, also from Autodesk.

“We ensure agreement among all the trades and then once that’s done, we sign off and produce shop drawings and fabrication sheets,” he adds. “With all that in place, we use the Sokkia instruments to lay out the massive number of points generated in the BIM process.”

OUT WITH THE OLD

Obviously, the layout process for a project with nearly a million square feet of floor space can be daunting. However, A.O. Reed long ago determined traditional layout methods to be outdated, choosing to replace them with use of optical instrumentation. According to Borg, their choice of instruments varied over the years until roughly 5 years ago when they replaced their existing total stations with Sokkia iX units.

“A friend of mine talked me into a different system which we actually used, with decent success, for a while,” he says. “But he then introduced me to Chad Dickey from Topo Element, the regional Topcon and Sokkia dealer, and Chad and I hit it off really well. Chad showed me the Sokkia machine, how easy it was to operate and the improvements we could make in our operation, and I was sold. Today, we own 11 of the Sokkia iX units, have two on rent, and every one of them is continually in use in the field.”

The iX Series that Borg cites is a trimmed down, high-performance, robotic total station solution. It provides his teams with a range of options, including the efficiency of a single-operator robotic system, the power of long-range reflectorless measurements, and if needed, performance as a hybrid positioning solution.

“The guys in the field are extremely reliant on that machine, making it one of our most used tools,” adds Borg. “But Chad and Topo Element have been the keys to our success throughout this whole process. He is extremely knowledgeable, very responsive to our needs, and the level of service he provides cannot be matched by anyone else we work with.”

From an end-user point of view, the use of the iX units has taken them into territory they never imagined being in, according to Curtis Sorchy, A.O. Reed’s 13-year veteran plumbing foreman.

“First of all, the accuracies are incredibly tight, made possible by us uploading the point data from Matt through MAGNET Field to our FC-5000 field computer,” he says. “Doing so ensures the points are landing on the grid just right. I take that data up to the deck where I get control from the general contractor in either offsets or civil coordinates, backsight to make sure that control is tight, and get to work.”

For Borg’s crews, “getting to work” means gathering points for the plumbing, fitting, and sheet metal trades working the job, with each point representing a connection for sheet metal straps, hangers and sleeves for both fitting and plumbing. And the volume is substantial: a typical floor has about 1500 points, with the lower/collection floors having closer to 4000, meaning more than 160,000 points will be marked by project’s end. Given that immense volume, Borg is more than grateful for the change in collection technology.

“In the old days, we were constantly referring back to a set of drawings, trying to pull dimensions, used a stringline or chalk lines on the deck, and needed a tape to measure in two different directions,” he says. “And, because of the way the trades came on site, it was not uncommon to have iron workers leaning up against our lines, or someone running a welding lead over our stringlines, impacting the accuracies. Now, we can be on the deck at the same time as every other trade—it makes no difference because there are no stringlines. Back then, we’d be lucky to gather 100 points in a single day. Now, one guy can do upwards of 500 points a day and our accuracies are through the roof.”

Although the use of robotic total stations for layout work is hardly new— A.O. Reed, itself, has been using them for more than a decade—the company’s move to the Sokkia solution has provided a host of unforeseen benefits.

“For us in the field, the outstanding connectivity is really the key,” says Sorchey. “With the system we had prior to this, we couldn’t get more than 200-300 feet away from the machine before losing the signal. Then, it would take forever to find us again, generally forcing me to look for a new setup location. All of that messes with productivity.”

By way of a comparison, Sorchey says he recently worked an 18-acre development project and was able to set up the Sokkia iX and shoot points anywhere on that job without any issues.

“The unit followed me everywhere; as soon as it found that crystal it would lock on,” he says. “Plus, I was able to get the correct triangulation and layout in the areas that I needed. As a result, our productivity was off the charts. On jobs like that, when people ask me where my machine is and I tell them it’s on the other side of the jobsite, they’re just amazed. It’s really been outstanding for us.”

“In the past, an apprentice could not be called upon to do this; you needed a journeyman on site—at twice the price—to pull the tape, chalk the lines, nail down the points, etc. It was cumbersome and far more expensive. Now, with the Sokkia units, I can take a first-year apprentice, most of whom are tech-savvy to start with, tell them how to set it up, and quickly have them out getting points. So, not only have we cut our layout time in half—maybe more—with this approach, it is much easier to bring on new people, which ultimately helps us move forward as a company.”

The UCSD Theater District project is slated for a 2023 completion.

Larry Trojak is president of Trojak Communications, a Minnesota-based marketing communications firm. He has written for the construction, recycling, demolition, scrap, and aggregate processing industries. For more about the Sokkia iX, contact your regional Topcon and Sokkia dealer or visit us.sokkia.com.