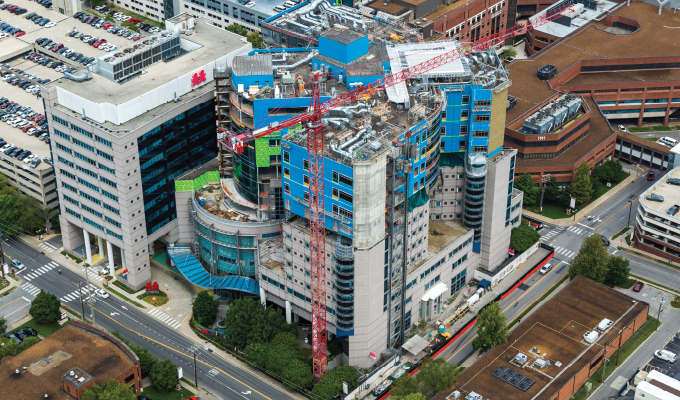 The process of adding additional levels to a finished building—known as vertical expansion—is no easy feat. Although vertical expansions have become more common in recent years, the fact that they can be done at all is a marvel of modern engineering and construction.

The pace of vertical expansions continues to increase because they often are the most sensible choice for building owners who need additional space, but only have a finite amount of land to build on. Sometimes the only way to go is up.

Hospitals aren’t the only type of buildings where vertical expansions are done, but the process makes particular sense for them because they’re built with a repetitive design where each floor is almost exactly the same. The addition of extra levels allows workflows to remain fundamentally unchanged, while preventing patients from ever being too far from critical services. Most new hospitals today are actually built to accommodate a possible vertical expansion in the future.

Every construction project has its own challenges, but hospitals have a uniquely critical function that means any construction project has to be as minimally intrusive as possible. That requires significant extra planning at the outset to make sure that the project is fully mapped out and any potential issues that could cause a delay or put patients at risk are accounted for. Leading construction companies handle this during the design phase of the vertical expansion, when they painstakingly note elevations and other key details so that there are no difficulties during the tie-in process when the new construction is connected to the original structure. It’s very careful work, and there’s no room for mistakes.

In addition, the construction team must examine how an expansion is likely to affect a facility’s regular operations and take steps to remediate that as much as possible. One of the most common issues is noise. If there are unavoidable steps of the process that will be loud enough to disturb patients, it’s important to address the issue in advance with the hospital to decide how best to work around it—for instance, doing work at a less-intrusive time of day, or temporarily moving patients to another area of the hospital so they’ll be insulated from the noise. Contractors working on these projects should plan on a more flexible schedule than usual to make sure they account for these situations.

Buildings in active use often have very little free space around them to accommodate materials, so there needs to be a workaround to allow the construction process to proceed without long delays. Contractors will often arrange for suppliers to do “just-in-time” delivery of materials on an as-needed basis, which negates the need to keep them on-site during the period before they’re used.

Construction workers themselves can be a source of disruption to a hospital environment, so some creativity can be required to allow them to do their jobs without disturbing hospital staff and patients. At my company, we recently designed and built a multi-step system to transport workers from the ground to the worksite six floors up. A scaffolding system first takes them to the roof of a one-story area of the building, which they walk across to reach a buckhoist, which lifts them to the worksite quickly—and even more important, quietly.

The make-or-break moment of a vertical expansion comes when the building’s roof is opened up, usually to extend a column or to tie in to an existing utility system. Because the inside of the hospital is exposed to the elements, precautions must be taken so that rain and wind don’t enter the existing building. Contractors generally keep a roofing team available so that any cuts made in the roof are patched up right away. Larger openings require the installation of a temporary roof, which can also be done fairly quickly.

To keep the patient area fully insulated and weatherproof, contractors can add a temporary barrier room between the existing building and the construction site. These rooms are fully airproof—a fan inside pulls any dust and debris out through an exhaust port, preventing them from going inside the hospital and potentially infecting patients. Following the final cleaning of the new space, contractors connect the existing building with the new section using a modular quick-connect system that keeps additional debris from being created. Remote monitoring systems are used throughout the process to ensure the air is clean and breathable.

So much of the success of a vertical expansion project—and, really, any construction project—hinges on an honest, open line of communication between the contractor and the client. That’s why at my construction company, we work to bridge that gap by using 3D rendering technology to help clients visualize what the project will look like.

This technology proved its worth for us on one recent hospital project. We had determined that a physicians’ parking lot was the only possible location for us to place our crane so that it would reach the entire construction area, but that was not an ideal solution. Our only alternative would be to use multiple cranes in other areas, creating additional disorder, but we were also aware that it might not be obvious to hospital administrators why this was the right course of action. By using a 3D depiction to clearly show them the various options and how they would affect the hospital’s daily operations, we agreed together that this was the correct decision.

Every vertical expansion project is unique and presents different obstacles, which is why you should spend ample time doing advance preparation and stay in constant contact with your client. By doing so, you’ll ensure that the final product is something you’re proud of and is able to stand the test of time.

Paul Lawson is a healthcare project executive for Turner Construction Company in Nashville, Tennessee. Lawson joined Turner in 2005 as a project engineer and previously served as the Special Projects Division (SPD) senior project manager. He has played a significant role in Turner’s recent healthcare work, including a $48 million, 95,623-square-foot vertical expansion of Saint Thomas Rutherford Hospital in Murfreesboro, Tennessee, that is now under construction. For more, visit www.turnerconstruction.com.