Wrapping steel beams with insulation is a common solution, particularly when non-thermally broken assemblies are already installed. While this option is relatively low cost and has a low impact on construction schedules, it is not a true thermal break. If properly specified, it can mitigate the formation of condensation, but the performance of the insulating material may degrade over time, and the appearance of the wrapped beam may require an architectural covering. This solution was frequently employed prior to the advent of engineered thermal breaks.

Another option for previously-installed assemblies is thermal insulating paint comprised of Aerogel beads mixed into a binding liquid. However, this is not a thermal break; it is an insulating product and its durability and performance over time will depend on the precision of the application (uniform coverage) and the condition of the steel (surface corrosion, dirt, and temperature at time of application).

Thermal pads are an inexpensive option for ultra-low-humidity environments and for low-load requirements. These insulating pads are bolted into place between head plates of steel beams. A review of thermal isolator pads of various thicknesses conducted by Morrison Hershfield indicates that this option is insufficient to control condensation in environments with relative humidity greater than 30 percent.

The effectiveness of thermal pads is dependent on the quality and thickness of material, and placement of the bolts that secure the pads. There is the potential for these pads to “creep” over time. As of this writing, suppliers of these products do not provide design support services, leaving the choice of product (and the liability) to the purchaser.

The final option is using engineered structural thermal breaks, which are load-bearing assemblies that truly “break” the path of thermal conductivity when attached between the face plates of structural steel beams. This option requires designers to take into consideration the bolt pattern of the units as they are fixed, but the benefits include prevention of condensation and mold, and reductions in heat loss by up to 50 percent, with no maintenance over the life of the building.

Structural thermal breaks for steel construction perform two functions: 1) to block the transfer of heat across the thermal bridge for the purpose of reducing energy loss and thermal conductivity through the building envelope, and 2) to maintain the structural integrity of the thermally broken connection and transfer loads from the cantilever to the building structure.

Structural thermal breaks consist of a proprietary insulating material of sufficient thickness (1.5 to 3 in.) placed between stainless steel plates on each face with a stainless steel tube welded between them. The plates and tube impart the module with the requisite stiffness to transfer axial, shear and bending stresses, while minimizing or eliminating the risk of mold and corrosion by preventing interior surfaces from cooling and forming condensation.

The placement of the engineered unit between the endplates of steel beams minimizes the surface area where the load bearing components of the structural thermal break cross the insulating layer and attach to the structural steel beams, satisfying both thermal and structural requirements. The use of stainless steel load bearing components contributes to the insulative performance of the module by conducting two thirds less thermal energy than would equivalent structural steel components.

Any thermal break should be independently checked and approved as compliant with standards set out by the American Institute of Steel Construction, the Structural Engineering Institute and/or the American National Standards Institute.

A structural thermal break, such as the Isokorb® Type S, replaces the highly conductive material of structural steel at the connection with an insulating material to give an effective thermal separation of the steel beam at critical junctures where thermal bridging might occur. The structural elements (threaded bolts and a hollow section) are of stainless steel to transfer the loads to interior members at approximately one-third the rate of carbon steel, while preventing corrosion. The components are then encased in an insulating material, reducing heat transfer by 85 percent compared to heat transfer through a continuous steel beam. Manufacturers of thermal breaks should be able to provide thermal modeling analyses to validate performance.

Structural Thermal Breaks create an insulated foam break between the exterior portion of a structural penetration and the interior structure that supports it to minimize thermal conductivity between the two masses. The insulating foam should be an excellent insulator. Stainless steel components are preferred as they are significantly less thermally conductive than carbon steel and resist corrosion.

As a load-bearing element, this thermal break is engineered to handle normal forces in addition to rotating bending forces and vertical shear forces transferred by the steel beam. At minimum, two thermal break modules are stacked one atop the other, unless only low shear force is being transferred. Additional breaks can be incorporated vertically and/or horizontally to handle higher loads at the connection points and resist wind uplift forces.

Addressing thermal bridges will improve insulation efficiency so large amounts of heat energy will not continue to escape the building. Look for part three of this article in the next issue of MCS as examples of steel buildings constructed using structural thermal breaks are presented. 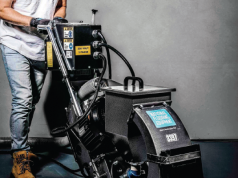 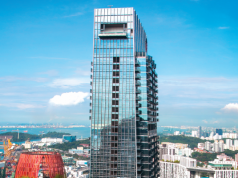 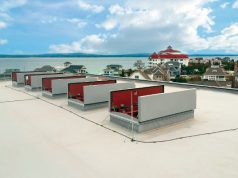