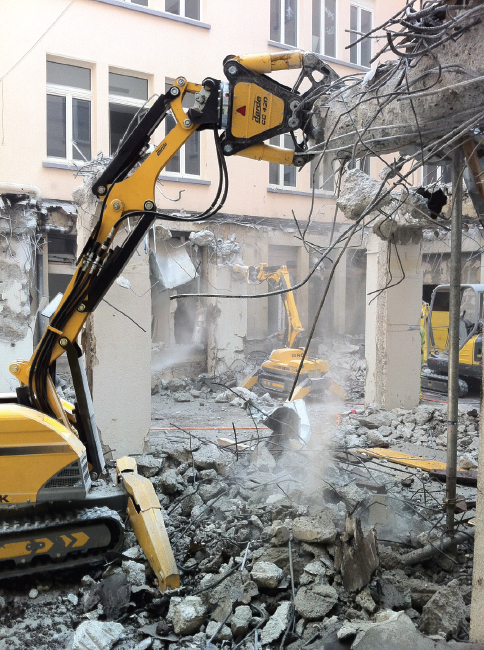 Remote-controlled Demolition Machines: On a Mission for Safety

Shards of concrete, high working heights, falling rubble, piles of metal rebar—it’s often what a construction and demolition jobsite looks like, and it’s a hotbed for injuries. Personal protective equipment like hard hats, boots, and safety glasses can help prevent some, but as long as operators are in the line of fire, the threat is there.

Amidst the debris another threat lurks. It’s less obvious, but no less debilitating—prolonged and repetitive use of handheld equipment. There’s no personal protective equipment to help fend off the injuries they can cause to arms, backs, hands, shoulders, and wrists.

Fortunately, there’s another option that attacks the problem of jobsite injuries from several entirely different angles: remote-controlled demolition robots. They are hard-hitting, powerful, and versatile machines that take safety, not to mention productivity, to a whole new level. And they’ve been doing it for more than 40 years.

The first commercially built remote-controlled demolition machine made its debut in 1981. It was designed by a Swedish contractor who had been awarded a job to clean a furnace in a lead smelting plant. The work required his crewmembers to endure above-normal temperatures and use jackhammers at awkward angles. It was a recipe for fatigue, potential burns and hand, arm, and back injuries. The contractor devised a solution for working smarter, not harder; a piece of equipment that could do the same work while the operator ran the machine from a safe distance. Over the next few decades, as the arsenal of remote-controlled demolition machines grew, so did their use in applications outside of smelting plants, and for good reason.

Today’s remote-controlled demolition machines have a three-arm system that on some models can rotate 360 degrees. This allows operators to perform a range of tasks at nearly any angle without fatiguing or straining muscles. Operators can equip them with attachments, including breakers, buckets, grapples, scabblers, and shears to do jobs like demolish, crush, cut, sort, and move material, all while remaining a safe distance from the work. This substantially reduces the risk of injuries or death from hazards like falling debris when operating handheld tools or machines, such as some mini-excavators, that are not fully enclosed.

Remote-controlled demolition machines can be as short as 3 feet and as narrow as 2 feet, so they can maneuver through doorways, into elevators, and throughout confined spaces. Some models can even climb stairs. And while the smaller models are compact, they can fight with the best of them to effectively demolish materials. Larger units can be as tall as 8.5 feet and as wide as 7 feet with even greater hitting power.

For example, demolishing a building in an urban area can be challenging. Imploding or using a wrecking ball comes with the risk of injuries to bystanders and workers, not to mention damage to nearby structures. Instead, contractors can use a remote-controlled demolition machine and use a “top-down” approach. They can equip the machine with a breaker or crusher, mount it to a hoist, and break up the roof while pushing demolished material into the building. This virtually eliminates the risk of injuries from falling debris and damage to adjacent buildings. There’s also less of a nuisance to occupants of surrounding buildings because they don’t need to evacuate. A “top-down” approach also might be one of the only options on projects where structures are located near hazardous materials like combustible fuel tanks.

Demolition work inside buildings and confined spaces also can be dangerous. Workers can get hurt if ceilings, floors, or stairs collapse as they are being demolished or when equipment exceeds low floor load requirements. Aged sewer and water tunnels also can collapse when crews demolish liners. And there are always risks when operating handheld tools at odd angles, such as overhead or horizontally. Compact remote-controlled demolition machines, on the other hand, can access this kind of work while remaining outside of the immediate work zone. Even something as seemingly simple as removing a concrete staircase can be accomplished quickly and safely with a demolition machine, eliminating not only major risks of injury, but little cuts and bruises as well.

SAFETY AND THEN SOME

Hands down the most notable benefit of remote-controlled demolition machines is safety, and it has been a primary factor in their increasing popularity. But so are the effects the machines have had on businesses. The increased safety leads to fewer injuries and workers’ compensation claims, which means associated costs are reduced substantially. For some companies that could mean a speedy return on investment, and for others it could be the difference between maintaining profitability and searching for a new line of work.

They’re fast, too. In fact, remote-controlled demolition machines can do the work of as many as three operators with handheld equipment in the same amount of time. This means contractors can do more with less and in less time, and that means they can bid on jobs with tighter deadlines.

Since remote-controlled demolition machines can be used with a variety of attachments in a diverse range of applications, contractors also can expand their businesses into new markets and bid on more types of jobs that they simply didn’t have the ability to take on before.

Safety is one of the most critical issues on every construction or demolition mission. Getting everyone home safe at the end of every day often requires reinforcements beyond standard protective gear. Especially when jobs become tricky or more dangerous, it’s time for the big guns – remote-controlled demolition machines. In the struggle for safety, efficiency and lowering costs, they’re the ultimate individual, crew and company protective equipment.

Peter Bigwood is the vice president of sales and marketing for Brokk Inc., a manufacturer of remote-controlled demolition robots. He has more than 30 years of industry and leadership experience. Bigwood is on the boards of the National Demolition Association and the Concrete Sawing and Drilling Association. He also is on the safety committee for the Steel Manufacturers Association. For more information, visit www.brokk.com. 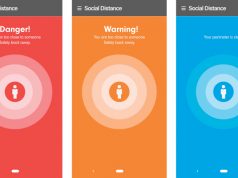 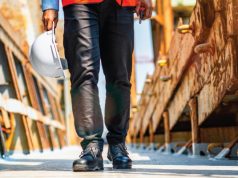 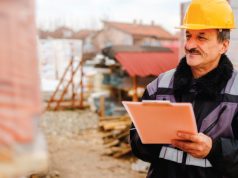