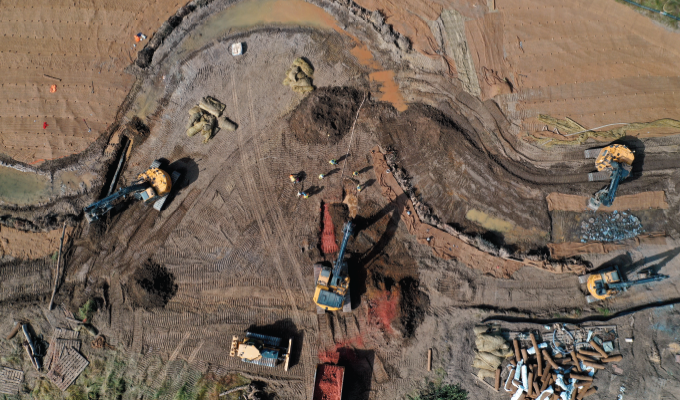 On a project to remediate 16,000 linear feet of Piney Run, a Baltimore-area stream, Bourn Environmental augmented its usual process with some “help from above.” By adding the use of GNSS technology, the Mitchellville, Maryland-based company recouped lost time and helped ensure that the stream and its adjacent watershed could flourish again.

Bourn Environmental was established in 2014 by Christopher Perry, a U.S. Army veteran of tours in Iraq and Afghanistan, and a holder of degrees in environmental science and environmental planning and management. After first working for a firm doing similar work, he went out on his own.

“I always loved nature and wildlife,” he says. “My experience in the Army was as a combat engineer so, when I separated, I paired up my two strengths—engineering and love of the environment—by doing wetlands mitigation. Today, we have a crew of nearly 20, with capabilities in stormwater management, living shorelines, streams—anything having to do with wetlands.”

Bourne’s project called for the remediation of more than 3 miles of a Piney Run tributary. He says the project—done for Maryland to earn credits under Clean Water Act provisions—was an effort to correct decades of stormwater mismanagement.

For years, Bourn Environmental had relied on survey stakes and a laser level for layout, and a small excavator to handle the earthmoving facets of the job. However, a visit to a training session in Wyoming, and hearing other environmental remediation companies sing the praises of GPS technology, convinced Perry to take his operation to the next level.

“Those companies raved about how much it sped up their production,” he says. “I thought the time had come give it a try; having the Piney Run job coming up seemed the ideal opportunity to do so.”

With that in mind, Perry contacted the team at JESCO, Inc., the local Topcon dealer. Although Bourn’s initial interest was in a GPS dozer, the JESCO team let Perry know of other options available to them.

“We knew we wanted a dozer with machine control because of all our flood-plain work,” says Perry. “However, JESCO brought an excavator equipped with a Topcon X53i system out for us to demo and our guys loved it immediately. Today, we have two such systems and can’t imagine doing another project without it.”

Remediating Piney Run was no small feat. Once a meandering, at-grade stream, scouring from flash storms created sections with 8-10 feet banks, preventing the stream from overflowing and emptying onto the adjacent flood plain.

“At Piney Run, we literally buried the old channel and carved a new one through the flood plain,” says Perry. “We raised the stream bed and lowered the plain so that water could empty onto it more easily. In addition, engineers designed a series of natural structures—using wood and boulders—to affect the direction and velocity of the stream. Because we had to maintain tolerances of .2 throughout the project, our excavator operators really embraced using GPS to create those structures.”

For some larger, 3-4 ton boulders, the excavators had to dig deep into the stream’s subbase so the top of the structure could hold grade and create a pool after it. There, Bourn’s operators found the GNSS solution invaluable.

“It’s hard to get huge boulders to stack perfectly to create a step-pool, yet still appear uniform,” says Steve Griffin, Bourn’s foreman. “Digging down to a specific grade for two different rocks each time allowed us to keep a constant elevation on the top. Our operators would measure two rocks that stacked well on top of each other, subtract that from final grade on the system, and then simply dig to that subgrade.”

Challenges Bourn faced at Piney Run included heavy rains, issues with pumps used to dewater areas, as well as some unforeseen red tape that forced them to fall behind in the early portions of the project. Once the GNSS solutions were added, however, their value became evident.

“We were 40 days behind schedule at one point but, after bringing the new equipment on board, reduced that by 25 days,” says Perry. “We increased efficiency creating the new flood plain with the GPS dozer, as well as from the excavators handling material movement and placement.”

Even the impact of the rover—a Topcon HiPer V with FC-5000 controller—was huge, according to Perry. “Being able to have any management-level person take that instrument—and, armed with the finished elevations, spot check things—was great from a quality control angle.”

Perry says the new solutions will afford them a competitive edge, particularly considering some of their bigger competitors either don’t have GNSS-based solutions yet or are only dabbling in it.

“We feel we’ve gotten into this technology at a great time,” he says. “The payback in efficiency alone is impressive. I can come onsite first thing in the morning and tell my operator to start work and he has everything he needs. Suddenly, he’s one of the most productive people on the crew.”

Bourn’s work window was subject to closures to accommodate trout spawning season—essentially shutting down the operation from October through May.

“That made our improved performance all the more appreciated,” says Perry. “With these changes in place, it’s hoped that greater numbers of trout will once again find it a suitable spawning area. Because most of my guys fish, they feel a real connection to the work we did here. In heavy rains, that flood plain will be a massive wetlands and serve as a great area for waterfowl. So yes, the new design will hold back nutrients and sediment, but it is also doing a whole lot of other good. We’re proud to have made that happen.”