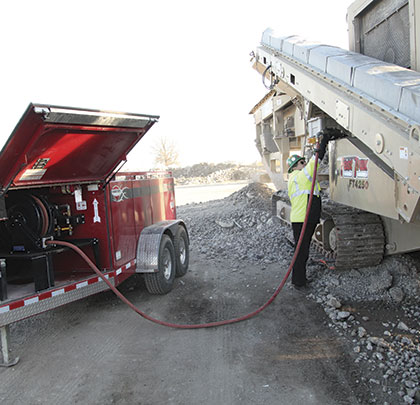 Norris Asphalt Paving Company has been building roads in southern Iowa for 70 years, winning national awards and thousands of loyal customers. Douds Stone, in business for 90 years, also shares a great reputation for quality and service, providing everything from aglime dust for farmers to 650-pound riprap stones used along riverbanks—and everything in between.
Norris and Douds merged in 2012, but operate two distinct business units. However, they shared a common problem: how to deliver fuel efficiently to jobsites in the face of increasingly stringent government regulations and the limitations inherent with large fuel delivery trucks.
The companies relied on two older 2,500-gallon fuel trucks to bring diesel to equipment in the field. Maintaining the trucks was always a challenge. But finding truck drivers with CDL or HAZMAT endorsement was an even bigger headache.
“Every time we jumped locations, I would have to find a person to bring out fuel from our old truck,” says Greg Baker, road foreman for Norris. “If the guy with the HAZMAT wasn’t around, you were handicapped. But you still had to get fuel to the site, which meant we had to put a 100-gallon tank in the back of my pickup truck. When you’re burning three to four hundred gallons of fuel a day, that’s three trips to the fuel truck or gas station.”
THREE TRAILERS PROVIDE MORE FLEXIBILITY
In 2015, the two companies replaced their old trucks with three 920-gallon Thunder Creek Multi Tank trailers. Each trailer contains eight 115-gallon DOT compliant non-bulk tanks that are joined by manifold to a common pump, creating complete isolation during transport and controlled dispensing of fuel at the jobsite.
Baker comments, “Anyone with a driver’s license can hook on the trailer and move it. That gives me a lot more flexibility. If something breaks down, I can help the mechanic rather than haul fuel. Someone else can grab a pickup and take the trailer out—now that I don’t have to make fuel runs.”
The MTT trailers also allow easier access to equipment, “With the trailer it’s more efficient getting around,” says Bob Mobley, paving supervisor for Norris. “It’s easier to get closer to the equipment. You can back it into tight spaces, park it between equipment, and run a hose from either side. We can also carry a couple cases of grease in the front.”
LOWER MAINTENANCE AND FUEL COSTS
Besides providing better delivery options, the MTT trailers also cut maintenance and repair expenses. Manson says, “We would buy retired fuel trucks, so you know they already had issues. We are required to make sure everything on a vehicle works—the engine, lights, brakes, and wiper. Everything. With the new trailers, we don’t have to worry about all that.”
Baker adds, “We used to call in bulk trucks to fill our fuel trucks. Now, we have our own bulk fuel tanks, so we don’t have that expense. We have all the fuel we need, 3 to 4 days worth for each trailer load. We always have fuel when we want it, without trying to find a distributor every time we go to a town.” 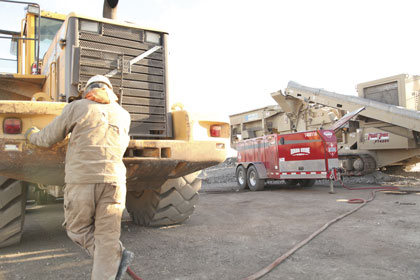 Featured Image: The 920-gallon trailers broken up into 115-gallon individual compartments allows for legal transfer of the trailer down the road without a HAZMAT endorsement.
Above: The new trailers require less maintenance and upkeep than the previous fuel truck owned by the company, and provide more flexibility in access.
INTELLIGENT DESIGN ON THE ROAD AND ON THE JOB
“They were smart about the design of this trailer,” says Manson. “It’s handy having the tools and other stuff inside the trailer. The hose reel is easy to get to and you’ve got room to pull it out. You can work from either side, which is nice if it’s between two pieces of equipment. The solar-charged batteries are up front and easy to reach. You’ve got room for a stepladder down below and a place for service equipment and a fire extinguisher. There’s a place to put your files. It’s all neat and organized.”
All three trailers were outfitted with optional integrated electric jacks. “Just flip a button up and down. It’s safer and easier. Just smart,” says Manson.
Both Baker and Manson usually work from dawn to dusk, and often later. Baker says, “You pave up to an hour before sunset, so if you fuel up at the end of the day, you’re working in the dark. That’s why it’s nice to have the LED lights on the trailer. They light up the whole area so you’re not fumbling around with fuel hoses in the dark.”
Although Baker’s and Manson’s crews don’t use equipment that requires DEF, they know it’s coming. They’re glad their multi-tank trailers can be fitted with 100-gallon DEF tanks. “It’s nice to know our trailers won’t become obsolete,” Baker says. “They’re designed to transport DEF as well as diesel. We’re not there yet, but we’ll be able to do that in the future.”
SHOWING THEIR PRIDE
Norris Asphalt and Paving has won two national championships for paving excellence and has been a finalist six times. They operate four asphalt plants and run three crews. Douds Stone also has a proud history, operating 12 open quarries and two sand operations. Both business units are justifiably proud of their reputation, which is reflected in their equipment. Baker says, “I put 5,000 miles a year on each trailer. It’s a moving billboard—free advertising for us. Thunder Creek worked with us on the color and we were able to get our logo on it.”
Another source of pride is the ability to keep moving ahead of the competition. “As we drive down the highway with our loaded fuel trailers, we see all the other companies just sitting still, waiting for deliveries. It’s a very positive thing for us,” Manson says. ■
About The Author:  Luke Van Wyk is the general manager at Thunder Creek Equipment. For more information about Thunder Creek’s multi-tank trailers, visit www.thundercreek.com.
_________________________________________________________________________
Modern Contractor Solutions, May 2017
Did you enjoy this article?
Subscribe to the FREE Digital Edition of Modern Contractor Solutions magazine. 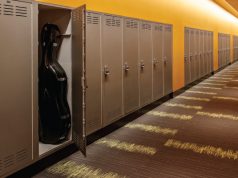 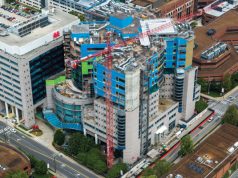