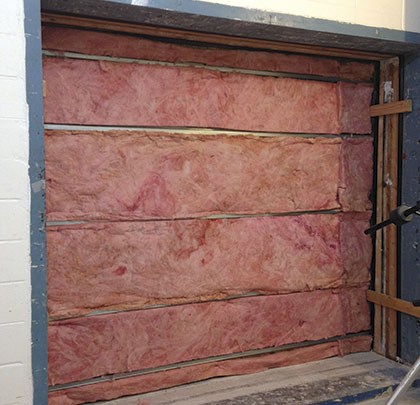 Imagine you’ve just spent a long day of traveling, and finally make it to your hotel room for a much-needed night of sleep. Suddenly you’re jolted awake by the person in the next room blaring their TV. Soon after midnight the pee-wee soccer team arrives, running up and down the halls shrieking and laughing.
It’s noisy disturbances such as this that led to inclusion of sound attenuation requirements in the International Building Code (IBC), Section 1207.2. In practical terms, the code-required sound transmission class (STC) of 50 means that stereos can only faintly be heard and that loud speech is not audible. In effect, assemblies with STC 50 remove or greatly diminish many of the annoying sounds people regularly encounter in hotels, motels, and other group sleeping quarters. However, in luxury hotels and condominiums where guests and residences have a greater expectation of quiet, contractors and architects often strive for ratings well above code, such as STC 55 or 60.
SOUND ATTENUATION IN BRIEF
In general, there are two ways to reduce sound transmission through wall and floor/ceiling assemblies. First is adding mass to the assembly, to provide a bulk barricade to block sound waves. Second is decoupling components of the assembly to decrease the potential paths along which sound can propagate.
Typical stick frame construction techniques to add bulk to walls and decouple the assembly, include:

While achieving sound attenuation well above the IBC-required STC 50, both of these assemblies are time consuming to build and require extensive materials.

Featured Image: Laboratory testing of sound transmission class rating for SIP wall assembly.
Above: 3.5-inch foam core SIP with gypsum wallboard, clip system, and fiberglass bats yields a high sound transmission class (STC).
MULTI-FUNCTIONAL ALTERNATIVE
Because of their high energy efficiency, structural insulated panels (SIPs) are commonly used for exterior walls and roofs, but a new noise reducing SIP assembly for interior walls has been developed. These assemblies simplify the construction of STC 50 or higher walls, while also meeting fire-rating requirements, in some cases.
With their continuous insulation and fewer gaps needing sealing than stick-built walls, SIPs provide less ways for sound to travel through gaps in the wall assembly. By themselves, however, SIP panels are less effective at blocking low frequency sounds. To address this limitation, the technical team at Premier SIPs has created wall assemblies that have been independently tested to provide STC ratings as high as 59.
The heart of each assembly is a standard SIP comprised of an insulating foam core and oriented strand board (OSB) skins on both faces. Directly attached to one side of the panels is 5/8-inch Type X gypsum wallboard. On the other side, a clip attaches to the SIP with a screw. Hat channels are then snapped into the clip and 5/8-inch Type X gypsum is then fastened to the hat channel. The clip minimizes the contact area of the various layers of the assembly, which helps decouple the assembly and reduce sound transmission, while the entire assembly provides sound-blocking mass. Additional sound dampening is achieved by adding 2½-inch fiberglass batt insulation in the space between the SIP and gypsum that is created by the clip. The assemblies are non-directional, so the clip system can be installed on whichever side of the wall the architect prefers.

One layer of gypsum on each side of the SIP yields an assembly with either STC 48 or STC 52 depending on the type of clip used to attach to the SIP OSB. Doubling the gypsum on both sides boosts the noise reduction to STC 58 or STC 59 again depending on the type of clip used, which is well above the IBC STC 50 threshold.
The assemblies with double layers of gypsum also achieve 1-hour fire ratings, which adds another dimension of performance wherever an hourly fire-rated wall is required. Yet, for those interior partition walls that do not need to be fire rated, the single layer gypsum assemblies work well, as they still achieve STC 48 and STC 52.
CONCLUSION
The SIP wall assemblies discussed above are substantially simpler to construct than stick-framed STC walls. First, because SIPs are available in up to 24-foot lengths, contractors can quickly complete entire wall sections. The clip assembly then allows for fast installation of the off-set gypsum wallboard.
These multi-functional wall assemblies help contractors achieve several goals quickly and easily: fulfilling code requirements for STC and fire ratings, while reducing construction time and hassles—a triple win! ■
About the Author:  James Hodgson is the general manager for Premier SIPS by Insulfoam, and serves on the Board of Directors of the Structural Insulated Panel Association (SIPA). A division of Carlisle Construction Materials, Premier SIPS is a leader in technical development and code reports for high-performance building panels. www.premiersips.com
_________________________________________________________________________
Modern Contractor Solutions – January 2017
Did you enjoy this article?
Subscribe to the FREE Digital Edition of Modern Contractor Solutions magazine.