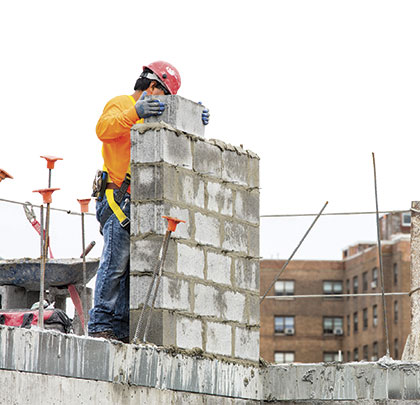 Safety remains a top priority—and challenge—for the construction industry, which employs almost 10 million people in the U.S. alone. Jobsites are inherently hazardous environments with heavy machinery and power tools, changing physical conditions, and dozens of trades working on site—often at great heights. While construction comprises less than 10 percent of the workforce, it accounts for 20 percent of private industry fatalities, 40 percent of which are due to falls.

In New York City, in particular, construction safety has come under a microscope with eight construction fatalities thus far in 2017, in addition to 24 between 2015 and 2016. This rate is disproportionate to previous periods in New York City—even when adjusted for the recent boom in construction activity. Across the city, workers, contractors, and policymakers are joining forces to adopt training practices, procedures, and tools to improve safety.

Lettire Construction Corp., a well-known firm in New York City’s multi-family housing sector, has had a long-term commitment to safety, focusing on continuous improvement and a robust, engaging safety program that starts with managers and continues down to the workers at the jobsite. As part of this, Lettire makes sure that every worker completes 10 hours of OSHA-certified training—and encourages project foremen to complete 30 hours of training—on avoidance, abatement, and prevention of safety and health hazards.

VISIBILITY ACROSS THE SITE

Despite ongoing training and prevention efforts, having complete visibility across the jobsite has always been an elusive challenge for Lettire. Each of its sites is like a city, with hundreds of workers coming and going, scattered across multiple floors and project zones. Supervisors have had to rely on manual processes to keep track of worker attendance and safety incidents.

“Total visibility into what’s happening at the worksite has been a critical challenge and significantly impacts how we manage risk on the job,” says Bernard (Bernie) Ruf, director of operations, Lettire. “While we have thorough safety measures in place, beginning with pre-construction and continuing every day on site, we had no way to identify and respond to safety incidents in real time. That critical vulnerability was what initially interested us in Spot-r.”

Spot-r is a wearable device that provides comprehensive, real-time detection of a slip, trip, or fall, sending a text message notification to a designated supervisor.

This visibility gap quickly closed when Lettire began using Spot-r, a wearable device that provides a comprehensive, real-time view of who is on the jobsite and where they’re located. It detects and transmits slip, trip, and fall events in real time and sends a text message notification to the designated supervisor, helping safety personnel identify and respond to incidents quickly.

“With workers regularly working in remote areas of the jobsite, it’s not uncommon for them to be in areas where others can’t hear them,” says Ruf. “Now, they can press a button on their wearable device to signal distress or other injury.”

PREVENTION IS WORTH A POUND OF CURE

“Once we started using the devices, we realized that one of the key, unexpected benefits is being able to identify and point out risky behaviors before an incident occurs,” Ruf notes.

During the excavation phase, for example, Lettire was able to identify a worker who was jumping into the excavation pit instead of using the ladder. This gave the supervisors an opportunity to intervene and reinforce safe practices, avoiding injury.

Scenarios like that as well as the automatic data that the sensor collects, such as when and where an incident occurred and the distance and force of a fall, are changing the way Lettire and its insurance providers identify, assess, and manage risk. When supervisors know about an incident as soon as it happens, they can improve their response and mitigate the severity of an injury.

In addition, Lettire began utilizing the system during its regular evacuation drills. Instead of sending a supervisor to each floor to blow an air horn—an imprecise method when you consider the size and noise of jobsites and the importance of time in an emergency scenario—supervisors can trigger an evacuation alarm simultaneously to every worker’s device.

The company is continuing to look at ways to use real-time data to document, share, and leverage both risky and positive behaviors to minimize risk and strengthen its safety culture.

“Safety is the responsibility of everyone—from the worker to the manager and owner,” says Ruf. “We’re excited about technology that gets everyone actively involved and data that makes a real difference in outcomes. At the end of the day, if everyone goes home safely, that’s the best day of all.”