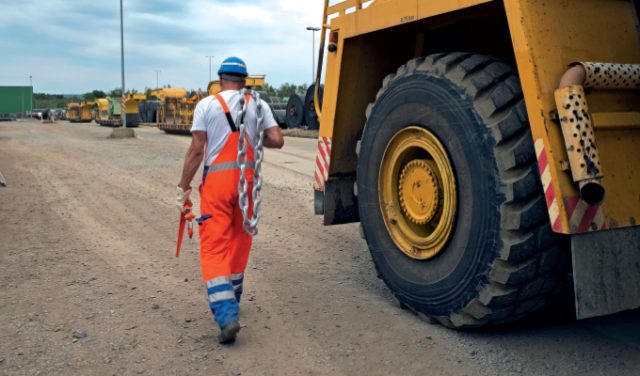 Anyone who has ever had to secure cargo with chains knows that simply getting the chains in position to begin securing the payload can be quite a task. Thirty-foot lengths of half-inch, 100-grade steel chain can weigh as much as 85 pounds each, 98 pounds if you carry the necessary 15-pound load binder at the same time. Now, multiply that by the number of chains that may be needed to adequately secure a load and you can be talking about a lot of cumulative weight.

“We use a different amount of chain for each load depending on the load weight and available securement points,” says Ace Carter, engineer for Northwest Logistics Heavy Haul, an Oklahoma-based heavy-haul service provider doing business throughout the U.S. and Canada. “A theoretical load requiring 14, 30-foot, half-inch 100-grade steel chains and binders with a 15,000-pound working load limit (WLL), would add up to about 1,372 pounds of securement, and simply deploying this is a long and strenuous task for even a two-man crew.

Carter says that on larger loads like tanks, a team of two would generally be used to secure the load. One person usually throws a guide rope, attached to the chain, over the tank to a second person on the opposite side of the trailer, who then pulls the chain up and over the vessel as the first helps guide it. “Either way,” Carter says, “steel chains take time to set and secure and it’s physically demanding work.

Steel chains aren’t just heavy, they can be abrasive as well, and when using them, Northwest often had to use carpet, rubber, fire hose, and other liners to protect the cargo’s finish from being damaged. The process sometimes required climbing ladders and the use of manlifts or forklift baskets, and there were more materials to buy, transport, store, and maintain. More care was also required when handling, orienting, and securing heavy chains, to avoid damage to payloads that could ultimately result in customer dissatisfaction.

Doleco’s revolutionary DoNova® PowerLash Textile Lashing Chain and Tie Down System is made of high-performance Dyneema® fiber. Dyneema’s ultra-high-molecular-weight polyethylene (UHMWPE) material is 15 times stronger than steel by weight, and made into chain, up to 85 percent lighter—so lightweight, in fact, that it floats on water.

“The DoNova PowerLash Textile Lashing Chain has extremely low moisture absorption, is self-lubricating, is highly resistant to corrosive chemicals, and is 15 percent more resistant to abrasion than carbon steel,” says Ralph Abato, president and managing director of Doleco USA. “The textile chain is available with a WLL as high as 22,000 pounds, more than that of half-inch steel chain and just under the 22,600-pound WLL of 5/8-inch steel chain.”

“Carrying the lightweight DoNova chains from their storage location on the truck or support vehicle to every point of securement on the trailer now requires much less effort. Less weight means easier handling, less fatigue, and a lower potential for injury,” Carter says. “It is safe to say that the workers love the product.”

Carter notes that now his folks can toss the guide rope over and pull the lightweight DoNova PowerLash Textile Lashing Chain over a tank and secure both sides, without worrying about scratching the tank’s finish. He believes that DoNova chains save time and effort while reducing worker fatigue and risk of injury.

“Time savings is likely less significant than weight savings and increased capacity,” Carter says. “Now we have less effort required for securement, less risk of personal injury, less gross weight to haul and permit, fewer securement devices required on some loads, and the 10-metric-ton-capacity matches securement points on many of our European trailers.”

Securing cargo on an open-deck trailer can be daunting at times. Construction materials and equipment in particular present unique challenges. Those securing cargo and vehicle operators must be familiar with federal regulations and must have a working knowledge of the physics of how cargo behaves once it’s in motion.

Depending on the type of load and the requisite securement method called for, those doing the securing have a number of decisions to make. Some cargo types are simpler than others and some are downright complicated, requiring significant physical effort. Some loads may be heavy, have sharp edges or be prone to shifting. Climbing into, onto, and around items in order to attach restraints can expose workers to a host of hazards.

“Maybe your heavy-haul drop deck or lowboy trailer is carrying large or articulating equipment to and from an off-highway worksite, Abato says. “If so, you have to know that any and all hydraulic arms need to be secured, and that any dirt and rocks left on the deck may be considered ‘unsecured cargo’ by the authorities.”

The point is, that replacing heavy steel chains with DoNova PowerLash Textile Chains makes life easier and less complicated, and gives fleets and owner-operators one less thing to worry about.

The extremely low weight and flexibility of DoNova PowerLash chain promotes easier handling of heavy-duty load securing devices. It can be easily thrown over even large loads or guided around complex cargo geometries without damaging them or their finish. With DoNova, individual workers can handle long lashing chains of more than 60 feet all by themselves.

The textile chains can also be shortened very quickly since all hooks of the tensioning device can be attached directly to the flexible chain links. This chain is particularly well suited for heavy use since it is extremely resistant to abrasion, chemicals, and even seawater.

Special load binders have also been developed for the DoNova Textile Chain. At just three quarters as long as a standard load binder, the DoRa® Ratcheting Load Binder fits into tighter spaces, but expands to enable users to reach twice as far as any other. The compact size and extra length of the DoRa save users time and trouble, because they don’t have to detach and reattach chains when periodically retensioning cargo.

With its WLL of 22,000 pounds, the DoNova PowerLash 25/8 may be used with the lashing strap as a tensioning element. Doleco’s Heavy Duty 2-inch Ratchet with Gear Drive, webbing made with Dyneema, features special eye-hooks and coupling links can substitute for standard load binders, and gives the load securement system an increased tensioning range at a reduced weight. The WLL of the tensioning elements employed (straight pull or loop) are easily matched to the WLL of the textile chain and hooks effortlessly into their respective chain elements.

DoNova can also be used as a head sling. If a load has no fastening points, it can be secured with a sling that runs over and/or around the cargo. This indirect lashing method allows even the most unwieldy load to be brought under control.

“The DoNova PowerLash head sling not only secures voluminous loads without lashing points, it also functions as a headboard substitute for loads that can’t be placed against the actual headboard of the vehicle,” Abato says. “DoNova can be guided around the load flexibly and tensioned with lashing straps that are hooked directly to the chain links.”

Few new products offer the quantity of dramatic advantages delivered by Doleco’s advanced textile chain technology. The contrast between steel chain and the DoNova PowerLash Textile Chain is quite tangible.

“All I have to do is let folks hold a steel chain in their bare hand and a DoNova Textile Chain in the other,” says Abato. “People immediately understand that this is an advancement in material engineering and industrial design that will have implications that extend far beyond cargo securement. There’s almost always a slight look of awe on their face.” 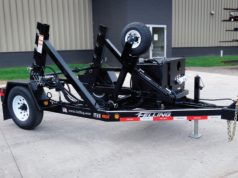 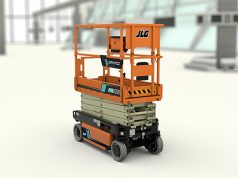 5 Attributes to Look for in Telehandler Tires