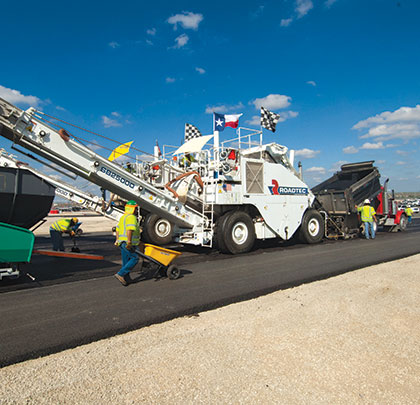 The most popular racing series in America, NASCAR, has very little in common with the most popular racing series in the world, Formula 1. NASCAR tracks are oval, while F1 circuits are road courses featuring a combination of twists, fast turns, and long straights followed by heavy braking zones. F1 circuits include purpose-built racetracks and converted street courses.
The United States has joined the F1 world big time. On November 18, 2012, the first Formula One United States Grand Prix race on a purpose-built track was held on the newly completed Circuit of the Americas (COTA) located outside of Austin, Texas.
To say that the construction of the 3.4-mile COTA F1 circuit was a challenge is an understatement. The Fédération Internationale de l’Automobile (FIA), which oversees the Grand Prix series of races, has exacting specifications for the design and construction of any new tracks, all with an eye on driver safety.
Nothing is perhaps more critical than the asphalt-paved surface. Imagine achieving speeds of 200 mph and heading into a 90-degree turn or tighter, the road surface has to work for the driver, not against them.
“We were awarded the construction contract for the COTA track, specifically the construction of the top four layers of the track, which includes the flexbase, an asphalt base course, an intermediate course, and the wearing course,” states Richard Mills, vice president of operations for Dallas-based Austin Bridge & Road. “We also completed subgrade preparation, flexbase, and asphalt for the side roads, parking lots, the pit lanes, and the service roads inside the track.”
The approximately $33 million project for Austin Bridge & Road required a total of 380,000 tons of flexbase and hot-mix asphalt throughout the whole 900-acre site. The racetrack itself required 90,000 tons of asphalt in the following breakout: 50,000 tons for the base, an 18,000 ton binder layer, and the wear layer required 22,000 tons. The Roadtec Shuttle Buggy MTV is designed to “shuttle” the hot-mix asphalt from the haul truck to the paver. The Shuttle Buggy features a patented anti-segregation auger that remixes materials to eliminate aggregate segregation and temperature differences.
“The amount of stress this pavement will undergo is tremendous,” Mills says. “It’s not downward stress; it’s shear stress; so as a result the specifications for paving are extremely stringent. These include very tight gradation requirements on the aggregate and extremely high-performance requirements for the bitumen or liquid asphalt; we had very tight control factors relative to temperature and consistency of the material itself—it was a big challenge to accomplish all of that.”
To help maintain the material’s required minimum temperature consistency of 302 degrees F and to help ensure that a continuous flow of asphalt fed to the three high-density pavers, Austin Bridge & Road used two Roadtec SB-2500D Shuttle Buggy® MTVs (material transfer vehicles).
The Roadtec Shuttle Buggy MTV is designed to “shuttle” the hot-mix asphalt from the haul truck to the paver, and also supports non-stop, continuous paving, which was critical for Austin Bridge & Road’s ability to meet the pavement specifications.
For Austin Bridge & Road, the four-layer project started with a flex base layer lift placed over a bed of 6 inches of crushed concrete. The flex base was crushed limestone processed through a pug mill adding 8-percent moisture and was laid with a paver. The density was to be 97 percent of maximum density. The company achieved a smoothness on the flex base layer of less than or equal to 4/10 of an inch.
The second layer placed on top of the flex base was a 3.1-inch course asphalt base—a standard HMA mix, which was placed by the paver.
For the binder and final wear lifts, the engineering firm spelled out all of the proprietary custom-mix physical properties of the material, the control requirements, and the finish results required for a high-speed precision racecourse.
Mills credits Brian Arent, quality control manager for Austin Bridge & Road, for developing a plan that requires precision execution and then taking responsibility for executing it.
“There are two keys to the success of the project, Mills says. “The first was the unwavering commitment to succeed on the part of our people. Everyone wanted to make sure we met these stringent specs. And the second was a very high level of collaboration among the technical people on how to execute the project, the materials people on meeting the specifications, our competitor in our market who we subcontracted the mixing portion, and the equipment suppliers to ensure we had the right machines, support, and contingency plans should there be equipment failure.“
Supplied by Closner Equipment, San Antonio, Texas, the Roadtec SB-2500D Shuttle Buggy MTVs played a significant role in Austin Bridge & Road’s success according to Arent.
Austin Bridge & Road had three pavers and two shuttle buggies effectively working side-by-side. They were staggered but functionally side-by-side. They completed the project within the 391 days allotted. ■
About The Author:
Jeff Winke is a construction writer based in Wilwaukee, Wisconsin. He can be reached through www.jeffwinke.com.
_________________________________________________________________________
Modern Contractor Solutions, February 2013
Did you enjoy this article?
Subscribe to the FREE Digital Edition of Modern Contractor Solutions magazine.