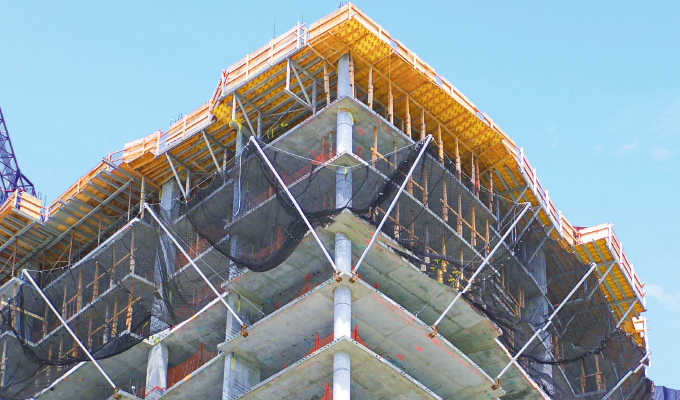 Construction managers, general contractors, and building owners are certainly familiar with safety netting systems and the reasons to install them, which include protecting workers and debris from falling from structures, as well as façade and ceiling containment. They also believe these passive systems create and maintain a safe work environment.

However, when it comes to specifying the appropriate solution for a construction project, many see netting systems as, well, pretty much all the same.

In reality, this could not be further from the truth, given the broad variability in the quality and construction of nets, suitability for the stated safety purpose, quality of testing, and other factors that impact the ability to meet a broad range of national and state fall protection and debris control standards.

While this list is extensive, it only serves to underscore the fact that netting system selection should squarely rest in the domain of experts and engineers, and not viewed as a mere commodity item. As such, contractors and building owners often rely on third parties with a wealth of netting-specific knowledge and expertise when devising safety plans or designing and installing rented or purchased nets and systems.

“You can’t just put a netting system together that you feel is going to work, only to realize at the end of the day it was not sufficient for the purpose,” says Harry Weidmyer of Construction Safety Service and Solutions. “You are taking something that is a vital part of safety on a project and so you can’t take shortcuts and put up netting that seems easier, or maybe requires a little less labor.”

As vice president of risk management at a major construction firm in New York for 20 years and now president of his own company, Weidmyer has witnessed the variability in netting system installation first-hand.

Given his company’s focus on risk assessment and loss control, Weidmyer has had the opportunity to work with contractors in New York, Connecticut, New Jersey, and Florida to review their insurances and to monitor their safety program and protocols.

Outside of New York City, which is known for the some of the most stringent netting system codes in the country, Weidmyer says, “I’ve seen netting system installed by contractors that I feel slice it thin in terms of protection. For example, they install a debris net that serves only the minor purpose of catching light debris, but if somebody fell into it, it is not going to support them.”

Weidmyer says that in New York City, the nets specified and installed are often expected to serve double duty of catching heavy debris as well as providing personnel fall protection. The codes even require paperwork that verifies the integrity of the manufacture of the net itself.

OSHA Guidelines Subpart M and Article 19 of the NYC Building Code require specific safety systems on a construction site. To meet the guidelines, contractors must submit a site safety plan to the city.

For high rise buildings 15 stories or more, netting is typically mandated in the safety plans from the 6th floor up. Nets are the primary passive fall arrest system option on the market and usually the most cost effective. They provide not only fall protection and the separation of trades, but also protection of workers and the public, in addition to other property below from falling debris.

In addition, netting can be used for other purposes including as a scaffold and barrier netting, for façade containment, and to protect the public from falling debris from deteriorating buildings until permanent repairs can be undertaken.

For the past 35 years, Weidmyer says he has relied on Pucuda – Leading Edge for the netting system designs in his safety proposals. Pucuda – Leading Edge designs the system and can submits the relevant paperwork and follows through until it is authorized by the Department of Buildings, if needed.

Pucuda – Leading Edge is one of the few netting system manufacturers that produces nets in the United States and that has a history of innovation in product design. The company was founded 27 years ago by hands-on netting expert John Rexroad, president, founder, and CEO of the company.

Weidmyer says the company is basically a one-stop-shop and he also turns to them for the nets as well, all of which conform to all ANSI, OSHA, Army Corps of Engineers, and ASTM standards.

“John is a phenomenal net system designer and so is his team,” says Weidmyer. “I have recommended him to quite a few contractors in New York City because I know his systems are designed properly and there is no second thought or concern about them working properly.”

Pucuda is also involved in a unique project at the Kennedy Space Center at the Air Force station at Cape Canaveral, supplying netting systems for a structural steel project to construct a launch tower and a lightning strike tower.

“On a portion of this particular project, we are building two towers and the primary function of the netting is to catch debris,” explains Alan Bukis of S&R Enterprises, the on-site project manager for the structural steel construction company. “So, if somebody is working up on level 400 and accidentally drops something, the debris netting will catch it before it goes to the ground and potentially hurts somebody.”

In addition, the nets are technically rated for fall protection even though it is not the intended use. In addition to the netting, workers are expected to tie off using a fully body harness whenever they are 6 feet above the floor.

These towers represent protection for the first new build of a Launch Pad in several decades. Therefore, it was important for S&R to interview several netting manufactures.

“Overall, [Pucuda – Leading Edge] had the best presentation as far as we were concerned,” says Bukis. “John Rexroad definitely knows the netting industry inside and out, and it was very evident in our initial discussions.”

One important aspect of the presentation was a review of samples of the netting, brought in by two of the three companies. “By appearance alone, you could see there was a higher quality netting with Pucuda – Leading Edge,” says Bukis. “The other company brought a sample and it was a considerable difference.”

Quality in the manufacturing and materials of netting is a major factor in the selection process. Many nets supplied by U.S. based companies are imported from China or India where the manufacturing process is driven by supplying an inexpensive product in mass quantities.

Even nets that appear adequate may have quality issues lurking under the surface that are not easily identifiable by the untrained eye. One example is a deterioration condition caused when an overseas supplier manufactures a net with a linked polymer that begins to deteriorate almost immediately. The condition is referred to as “wooly bear” syndrome, due to its appearance. This can dramatically affect the longevity and safety of the products.

Although in the construction industry nets are often rented for a project, S&R Enterprises decided to purchase the nets from Pucuda in anticipation of additional future projects. For this reason, it was even more important that the net and system were manufactured with the highest quality materials and with longevity in mind.

Bukis says there were installation challenges to overcome as well., as one of the towers was a sloping triangle that progressively narrowed as it went up.

“He is not afraid to come out and go up in a structure and actually look at the installation,” adds Bukis, noting that this was also during the COVID-19 pandemic. “Just him being here and knowing that he’s the expert and him confirming that the installation was correct alleviated all their concerns. So, it was definitely beneficial that he was willing to come out and do that.”

With netting systems, the most well-designed and manufactured systems are those that go unnoticed and can be taken for granted. It is only when someone, or something, falls and causes damage or injury to people or property, and it makes the evening news that netting systems take center stage.

With so much at stake, contractors and building owners would be well served to seek out expert advice from netting system experts to avoid installing defective products that fall below the safety standards.

“It all comes down to safety,” explains Bukis. “If something or someone happens to fall, you are going to want the best nets available. I feel much more comfortable with a higher quality product, because the goal is, we don’t ever want any of our people hurt.”