Home Project Profiles All for the Love of Trees, Massive Structural Concrete Removal 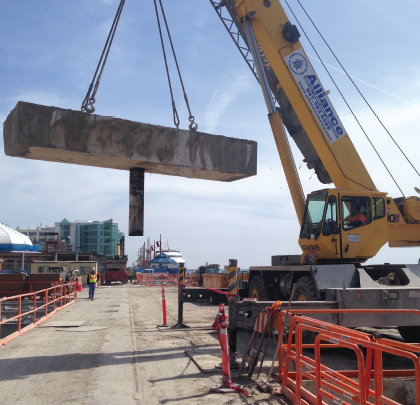 Contractor performs cutting and removal of massive structural concrete at Chicago’s iconic Navy Pier
In 1916, Municipal Pier in Chicago, Illinois, was the first pier in the U.S. to combine the business of shipping along with entertainment. Municipal Pier was renamed to Navy Pier in 1927 as a tribute to the U.S. Navy personnel that served in WWI. Currently, Navy Pier is considered one of Chicago’s most historical and popular landmarks the city has to offer.
In June 2011, Navy Pier Inc. was established as a not-for-profit corporation to maintain Navy Pier as a historic public landmark and oversee its redevelopment. Navy Pier Inc. issued The Centennial Vision as a framework for reimagining Navy Pier as it approaches its centennial anniversary in 2016. The Centennial Vision shows the redevelopment of Navy Pier to be converted into a bolder, greener, and more contemporary urban space to elevate Navy Pier as a world-class attraction. The redevelopment project at Navy Pier has one very intricate task of cutting out and removing 56 sections of massive structural concrete slabs and beams directly over Lake Michigan. These concrete openings are being created for the installation of new recessed steel and concrete tree pits that range in overall size between 17 feet by 16 feet and as large as 17 feet by 28 feet. Alliance Concrete Sawing & Drilling located in East Dundee, Illinois, was called upon by Madison Evans (joint venture) because of its 50-plus years of combined experience in demolition/concrete sawing/ robotic demolition. Alliance worked closely with Madison Evans to create, maintain, and beat a very aggressive schedule.

The cutting and removal sequences had to be carefully thought out in order to not disrupt the integrity of the existing structure, as well as not exceeding capacity of the crane. Alliance Concrete Sawing & Drilling excels in this process by meticulously dissecting original drawings of the structure, calculating weights, and developing a detailed step-by-step process of cutting procedures and methods. All precutting was completed full depth between existing structural beams prior to installing anchors to insure smooth working surface for slab saws. After precuts had been made, drilling and setting 1-inch Hilti HIT-HY 200-R epoxy anchors for rigging points were completed. Alliance’s 50-ton, rough terrain crane was utilized to hoist up the large masses of concrete that weighed an excess of 35,000 pounds per piece. Four different Alliance Concrete Sawing custom-built wire saws and a Diamond Products CC110 deep cut slab saw with a 72-inch blade were used to cut thru the 31-inch railroad track embedded slabs and 34-inch concrete beams.

While working above Lake Michigan, saw cutting and hoisting out concrete structures can be a daunting task when taking into consideration the fluctuating water levels and tides of the lake. Alliance took it upon itself to fabricate and build three custom-made pontoons to catch any chips of concrete and slurry from getting into the water. All pontoons were ingeniously created to be able to move between the existing column spacing and also be able to fit under the pier structure and still with enough room to attach heavy reinforced plastic to the underside of the concrete deck. Getting the pontoons into place during the cold months was difficult because of the large amount of ice that formed on the lake. Six Kasco ¾ horse de-icers were strategically placed in the water and ran 24 hours a day to keep ice from forming on the lake to insure mobility of the pontoons to the work areas. Once the pontoons were set in place and moored off, Diteq slurry dry concrete gelling agent was spread out and dispersed on the pontoon platforms. Once slurry from the cuts landed on the pontoon, the Diteq slurry agent worked perfectly to turn the concrete slurry into a gel substance that could be shoveled up for easy cleanup and also insured no lake contamination.

Completing a concrete saw cutting project of this nature is complicated, but when you factor in 2013/2014 Chicago winter ranked the 3rd snowiest on record and the coldest winter in 30 years (Cited by WGN Chicago) then it becomes nearly impossible for most companies. Alliance took this in stride as usual and came up with more ingenious ways to keep on schedule and push through the inclement weather for 3 months that they were on site. An electrically heated water hose was used to keep the water from freezing leading up to the area where the saw cutting was being performed. Alliance fabricated and erected two of its own 32 foot by 24 foot heated work area enclosures to work inside of during the snow, cold, rain, etc. These enclosures were built out of heavy gauge metal studs and reinforced poly fabric. The enclosures were designed and erected with lifting points so that the crane could quickly pick up the entire enclosure and move it to the next opening. Alliance developed an ingenious vinyl retractable roof system that could be pulled back quickly for crane picks and closed back up quickly to maintain heat. In all, more than 1,316 tons of structural concrete were saw cut and hoisted out, trucked away, and recycled. Alliance Concrete Sawing completed the Navy Pier project ahead of schedule and with a perfect safety record.