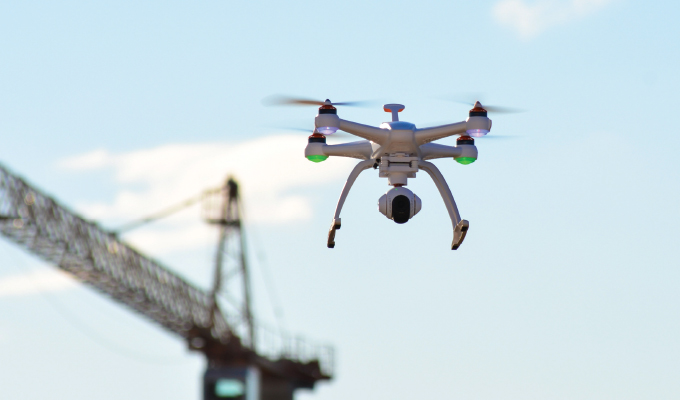 In December 2018, it was revealed via a Freedom of Information Act (FOIA) request that on May 18, 2018, the Occupational Safety & Health Administration (OSHA) issued an internal memorandum to its regional administrators directing the procedures for the use of “Unmanned Aircraft Systems” (UAS)—commonly referred to as “drones”—during its safety and health inspections.

The stealth memorandum is in effect but very little is known about its practical impact on enforcement activities and results, although they have reportedly been used so far on nearly a dozen worksite inspections. In order to protect yourself from unauthorized searches in violation of the Fourth Amendment to the U.S. Constitution, it is important to know the do’s and don’ts for OSHA inspections when attempting to conduct surveillance of your worksite.

First of all, it is critical to remember that OSHA does NOT have warrantless search authority. As a practical matter, it may not be wise to demand a warrant whenever OSHA shows up, because it will antagonize them, and also reduce the amount of discount you can receive on citation penalties. But there are certain situations where requiring them to obtain a warrant is justified, such as in a fatality case where you need to get your response team on site (safety officer, counsel, technical experts, or manufacturers).

Normally, even without a warrant, you can limit the scope of an OSHA inspection depending upon the type: a hazard complaint-based inspection typically only allows OSHA to look at the equipment or area at issue. However, even during a limited scope inspection, if OSHA observes a violation “in plain view,” that justifies them expanding the scope of the inspection.

If a drone is used, this makes a larger portion of your construction or other outdoor worksite available to them. If the inspectors observe something through a fence or from outside or above your property that is a problem, this can justify opening an inspection event, particularly if the condition presents an “imminent danger.”

Imminent danger inspections are OSHA’s top priority, even surpassing fatality or injury case responses. Normally these plain view inspections have been triggered by OSHA driving by a facility or worksite (often in construction) and seeing workers through a fence, in a roadway trench, or up on a roof or billboard working in an unsafe manner. With drones, OSHA can monitor the use of fall protection and other PPE, as well as watching for improper scaffold construction, or ground control hazards in areas being blasting or excavated but where inspectors cannot easily or safely gain access afoot.

OSHA is currently exploring the option of obtaining a blanket Public Aircraft Operator (PAO) authorization, which would allow it to “fly missions that meet the governmental functions listed in the Public Aircraft Statute.” They also have the option of seeking civil operator status under the Federal Aviation Administration’s civil rules. Drones that will be used for OSHA inspections must weigh less than 55 pounds and be registered with the FAA if the UAS weighs more than 8.8 ounces. At this time, OSHA says it will “obtain express consent from the employer prior to using UAS on any inspection.” Personnel on site must be notified of the aerial inspection prior to launching a UAS. The OSHA representative operating the drone must keep a visual line of sight with the UAS, only operate it during the day (sunrise to sunset), and flight speed cannot exceed 100 mph. The UAS must yield right of way to manned aircraft, such as planes and helicopters.

The UAS also cannot operate more than 400 feet above the ground, except when within 400 feet of a structure, and then it can hover up to 400 feet above the top of the structure. This allows for inspection of rooftops, for example, to see if skylights have proper covers when workers are exposed or to observe work performed by mechanical contractors in those areas. Drones are intended to be mainly used for inspection of areas that are deemed unsafe or difficult for inspectors to reach on foot.

Finally, OSHA says that the UAS will not operate over any persons not directly participating in the operation unless they are in a covered structure, or inside a stationary vehicle that can provide protection from a falling drone. Each OSHA UAS inspection will include at least three team members, tripling the sets of eyes looking at your workplace for hazards.

So, is the use of drones by OSHA something to be concerned about? There are many factors to consider. If the employer denies the use of UAS, will they return with a warrant to use them anyway … and risk becoming a target for a harsher inspection, or viewed as a “bad faith” employer who will be denied potential fine reductions (OSHA maximum penalties just rose to $132,598 on January 23, 2019)?

Another concern, on the flip side, is that OSHA drones will be shooting videotape, which can capture trade secrets … as well as employees caught in the act of doing something that constitutes a legal violation of OSHA rules. OSHA’s memo also fails to detail how the information gathered might be protected, and with whom it would be shared—including through FOIA requests. Will employees be concerned about being captured on drones without their express consent, and do you need a policy for this?

While there may be more questions than answers at this point about the practical impact of drone inspections, it is wise to educate your supervisors and workers now, so that if an OSHA UAS team shows up, everyone will know their rights. You can also choose to adopt a policy in advance on whether a warrant will be required at all, only for UAS inspection activities, or for all OSHA inspections. The choice is yours … at least for now.

For more information on OSHA’s use of drones for safety and health inspections, citation defense, or best practices for OSHA compliance, contact Adele Abrams, Law Office of Adele L. Abrams PC, at safetylawyer@gmail.com.