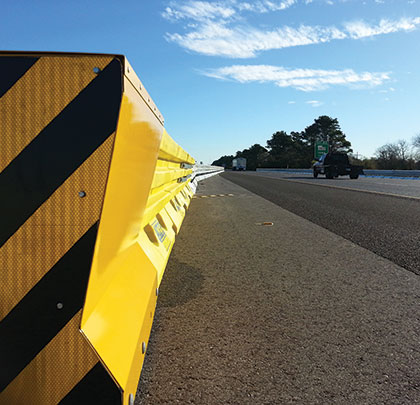 By Mary Beth Klein
With today’s overcrowded highways, a construction zone can quickly become cramped and confusing. Moving trucks and equipment, combined with bulky safety hardware, can be hazardous for drivers and workers. In December 2012, Louisiana Department of Transportation and Development (LDOTD) began a 9-month project of installing variable message signs on I-10 in the Lake Charles area. The project is situated in a high-traffic area and they wanted to deploy simple, efficient construction zones for the duration. Looking for a change from the heavy, difficult-to-maneuver concrete traffic barriers (CTB), Tyson Thevis, LDOTD project engineer, and Michael Broussard, project manager for Diamond Electric Co., Inc. of Baton Rouge, worked together to find an alternative solution.
ALTERNATIVE SOLUTION
During a meeting with Gulf Industries, Inc. of Covington, Louisiana, they discovered the Vulcan Barrier of Trinity Highway Products/Energy Absorption Systems, an NCHRP 350 Test Level 3 and 4 steel longitudinal barrier that may be used in place of the traditional CTB. The product immediately caught their attention: comprised of galvanized steel, the 4-meter sections are lightweight and stackable, which allows for up to 480 feet of Vulcan to be transported on a flatbed trailer. Each section of Vulcan is easily deployed and positioned using retractable casters and interlinked with a vertical steel pivot pin, which allows the system to follow curves of up to 6 degrees per 4-meter segment. The Vulcan is also compatible with a variety of crash cushions and end terminals, which the project required.
Citing the ease of setup and deployment, consolidated shipping, and versatility, Michael Broussard comments: “Vulcan was cost effective versus concrete due to the nature of the project. Diamond may need to reconfigure some of the eight work zones, and Vulcan is much more adaptable to such movement and transition.” With Vulcan Barrier chosen as the preferred barrier for the project, maintenance and redistribution will be easier than usual for the crews who are used to working with CTB: a 4-meter section of Vulcan weighs 1,100 pounds, whereas a 6-meter section of CTB weighs 8,000 pounds. 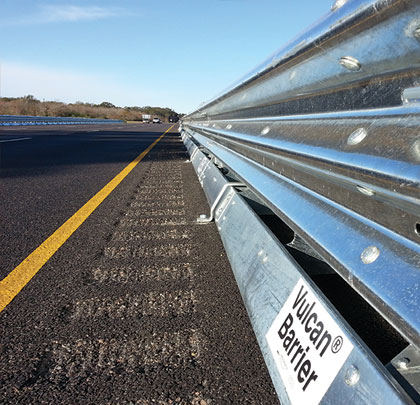 IN THE ZONE
There are currently 248 sections of the Vulcan Barrier being leased from Gulf for the project. Gulf coordinated with Trinity’s Pell City, Alabama, plant to ship the Vulcan directly to each of the project’s eight separate work zones. At the sites, crews used forklifts to offload two sections of the Vulcan at a time. Next, the Vulcan sections were rolled into position, linked together with the steel pivot pins, and anchored. The 450-foot runs were then attenuated with an NCHRP 350 Test Level 3 crash cushion, the ACZ-350. Jack Harper Contractors Inc., a subsidiary of Gulf, completely assembled and installed the eight zones over 8 separate nights. Each night, crews installed 450 feet of Vulcan, plus an ACZ-350 crash cushion. Because of the lightweight, stackable design, fewer trucks were used to transport the Vulcan than would be required with CTB, freeing up valuable time and resources. And, crews were easily able to place the product because of its simple deployment and maneuverability.
The sleek galvanized lines of the Vulcan Barrier coupled with the narrow profile of the ACZ-350 give the zones a clean and spacious appearance. Measuring 32-inches high and 21.5-inches wide, the inwardly sloping, ribbed sidewalls of the Vulcan are non-gating and designed to redirect a vehicle when impacted according to NCHRP 350 standards. Since December, LDOTD has already received praise from its drivers about the I-10 project. According to Tyson Thevis, “The Vulcan looks great. LDOTD has had several levels of positive feedback from the public on the appearance. The public image of this project is very good.”
While the Vulcan Barrier is perfect for the short runs of the work zones on the I-10 project, its versatility makes it a popular choice for many other types of applications as well. For areas that require gated, easy access beyond the barrier, Vulcan Barrier sections can be reconfigured as simple median gates with the addition of a Vulcan hinge. The Vulcan Gate can be manually opened in about 1 minute by removing several pins, deploying the casters, and then pushing the Vulcan modules out of the way. Projects requiring the opening and closing of traffic lanes benefit from the Moveable Vulcan Barrier. This barrier is easily repositioned with the Vulcan Transfer Attachment (VTA) when connected to a skid steer or front end loader. Use of the VTA allows the operator to reposition 1 mile of Vulcan Barrier, 1-lane width, in approximately 20 minutes from either side of the barrier. And, for emergency situations that require immediate deployment, numerous DOTs and contractors maintain Vulcan quick response trailers. Quickly deployed, responders can efficiently redirect traffic in instances of rock slides or other emergency road closure situations. ■
For More Information:
The Vulcan Barrier is available for sale or lease from numerous distributors across the U.S., as well as internationally. For more information about this product or others offered by Trinity Highway Products/Energy Absorption Systems, or to find the nearest supplier, call 888.323.6374, or visit www.EnergyAbsorption.com, www.highwayguardrail.com.
_________________________________________________________________________
Modern Contractor Solutions, February 2013
Did you enjoy this article?
Subscribe to the FREE Digital Edition of Modern Contractor Solutions magazine.