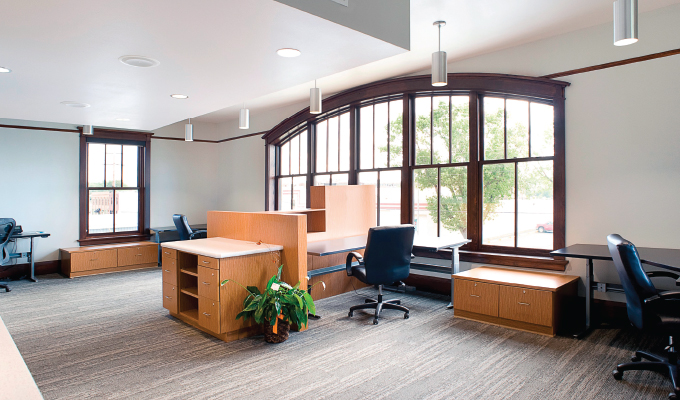 The Sioux Falls East Side Fire Station and Branch Library, according to the South Dakota State Historical Society, was constructed in 1916 and co-occupied by the city’s first motorized fire truck crew and its first satellite branch library. Despite opposing requirements for loud vs. quiet, the oddly paired public servants shared the space until the 1960s when the once vibrant building was relegated to a recreational equipment storage space and began to show signs of neglect.

Architect Todd Stone, CEO and principle for Stone Group Architects, had always considered the building, located in Sioux Falls’ Heritage Park, to be a diamond in the rough. Over the years, as he watched the structure slowly fade into disrepair, he never abandoned his dream of restoring the property and reawakening its past character.

Stone’s vision became reality in 2017 when a serendipitous decision by city officials allowed Stone to purchase the property for $211,000—just as his firm was beginning to outgrow its 2,000-square-foot headquarters. His innovation and tenacity would eventually place the one and a half story building on the National Register of Historic Places and earn it the 2020 Sioux Falls Mayor’s Award for Historic Preservation.

During the early days of the renovation, the architect began the lengthy process of applying for historic window approval, which can be one of the most critical and challenging aspects of the process. While restoration of the property forged ahead, window design negotiations were ongoing.

The role that natural light played in Stone’s overall design scheme—to bring the outside indoors—placed particular emphasis on the window design. On the recommendation of Tim Lund of Kitchen & Windows Unlimited in Sioux Falls, the architect chose to source all 36 windows through Weather Shield®, a Medford, Wisconsin, firm with an unparalleled reputation for vintage window design—and the only firm that could meet the stringent criteria for replication.

BUILDING WITH A VIEW

Stone explains, “We were able to work out details with their architectural window team, who then custom-made each window to our liking—including our choice of wood species and quality for the interior.”

He continues, “They even matched the exact specifications for a large bi-fold window located on the building’s west side. We kept all historical trim on inside of building, which was a bit of a challenge, but with the support of Weather Shield’s specialized design team, Tim and his guys made it work.”

Lund elaborates, “For all 36 windows, we were able to use the American fir interior and black exterior frames—all custom-sized to fit each opening, which allowed the existing historical trim to remain in place. We installed special brick mold on the exterior that matched the building’s original wood brick mold beautifully.”

The round-topped window located on the upper level of the front entrance presented the most obstacles for Stone, but he saw only potential in that grand feature.

“We wanted a wow factor—something that would draw people’s attention to this historical building,” he recalls.

The opening spanned 18 feet wide by 93 inches tall and had been fitted with glass block, aptly named since it blocked the natural light and created a dim interior space on the upper floor. In addition, many of the wood insert boards had rotted through.

“Stone notes, “One of the biggest challenges was getting an accurate radius measurement to meet National Historic Society expectations. Ultimately, with guidance from the Weather Shield team, the specifications were met, and their team got to work on the design.”

The hefty glass replacement components were shipped in five pieces, which were joined with wood spacing pieces and secured by a single piece continuous arch 20-foot aluminum trim fit over the top. The end result was a sleek, elegant glass expanse that allowed the outdoor light to pour in—a stunning focal-point window and a beacon for patrons and curious onlookers.

Lund enthusiastically noted, “It turned out absolutely fantastic—what Todd did with the building from top to bottom. The windows look like they were there forever, and the mixed grain fir blends right in with the existing woodwork. Weather Shield partnered with us through the entire process to help accomplish this beautiful look.”

“The project took a full 3 weeks to complete,” explains Troy Wolf, owner of Wolf Construction in Sioux Falls. “We had to remove the existing windows and then attach the new window frames to the exterior brick, which was extremely brittle in several spots. But it all turned out really well. Weather Shield provided a quality product that installed easily with few adjustments.”

In addition to replicating the window design, Stone earned high praise for his painstaking restoration of the original brick walls in the garage and the structural clay tile wall in the former library. As a tribute to the fire fighters who once served the city, he included a vintage fire pole in the office space motif.

The upper half-story, which once served as the fire crew living space, was repurposed into a co-working space for outside clients, and Stone’s craftsmen restored the natural wood on the firemen’s lockers to add an authentic feel to the space. With an eye towards expansion, the CEO had the roof contractors install a support structure to accommodate a future rooftop patio with a view of downtown Sioux Falls.

As Stone reflected on his quest for National Register for Historic Places status, he acknowledged that the rigorous process was daunting at times but worth the effort.

“It took four attempts, and the guidelines were stringent, but we proudly persevered to earn this prominent, historic designation.”

Based in Medford, Wisconsin, Weather Shield remains family-owned, with three generations actively involved in the day-to-day operations. Over the years, dedication to innovation has grown the company into one of the nation’s leading window and door manufacturers. For more, visit www.weathershield.com.