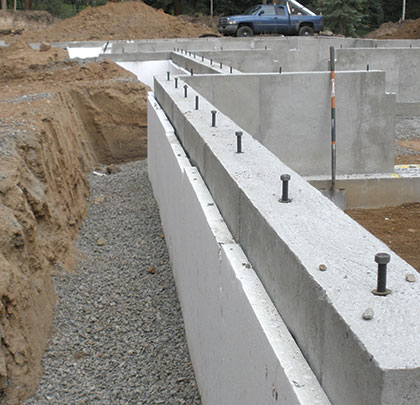 Is insulation really needed on buried foundation walls and under concrete floor slabs? In short, “yes.”
Those of us who have been in the building business for some time will recall that buried houses were all the rage for energy efficiency at one time. On the face of it, it seems reasonable that several feet of dirt would insulate a building.
Yet, the U.S. Department of Energy (DOE) explains that even though buried buildings are “less susceptible to the impact of extreme outdoor air temperatures,” they still require insulation. The EPS Industry Alliance notes that a lack of insulation on below-grade foundations, crawlspaces, and under slabs accounts for up to 25 percent of a building’s total energy loss. Un-insulated concrete provides a thermal bridge between a building’s heated interior and the relatively cooler earth surrounding the building, or through slab edges exposed to the outside air.
Below grade insulation not only helps reduce energy costs, it reduces interior condensation on foundation walls and protects concrete from freeze-thaw cycling, thereby helping minimize cracking, spalling, and frost heave.
Commonly used below-grade insulations include expanded polystyrene (EPS) and extruded polystyrene (XPS). When choosing between these materials, it is important to consider their crucial performance differences regarding moisture resistance and thermal performance (R-value).
After looking at those factors, this article will explore the importance of evaluating insulation’s compressive resistance to avoid over-engineering insulation—and thereby saving material costs.
MOISTURE RESISTANCE
As with many building materials, water is the enemy of insulation. Damp insulation is less effective at blocking the flow of heat than dry insulation is, and can degrade the material over time.
Compared to other parts of the building envelope, below-grade insulation applications are often subjected to elevated moisture levels from damp earth. So, it is especially important in below-grade applications to consider insulation’s moisture performance.
EPS and XPS insulations perform very differently when it comes to moisture. EPS tends to absorb moisture quicker, but releases it much faster than XPS does. This has led to confusion about which material performs best, as XPS comes out ahead in the laboratory, while EPS is superior in real-world applications.
Both insulations commonly are evaluated per ASTM 272, Standard Test Method for Water Absorption of Core Materials for Sandwich Constructions. In this test, insulation samples are fully submerged in water for 24 hours, then weighed for moisture absorption immediately upon removal from the water.
The problem is this method is designed to test for product consistency, but does not adequately reflect real-world building conditions. Unless a building is subjected to extensive flooding, its below-grade insulation is almost never fully submerged as in the laboratory test. And, unless such flooding is prolonged, the test doesn’t consider how insulation dries between periods of moisture exposure.
At least one marketing campaign is based on the science of the in-lab test, but as contractors know, what really happens in the field is what matters most.
A number of studies of insulation exposure to moisture in actual field conditions shows that EPS outperforms XPS by a wide margin, largely because EPS dries much faster than XPS.
For example, the independent lab Stork Twin City Testing evaluated the moisture content of EPS and XPS buried side-by-side for 15 years on a building foundation in St. Paul, Minnesota. At the time the insulations were removed, the EPS was four times drier than the XPS—the EPS had only 4.8 percent moisture by volume compared to 18.9 percent moisture content for the XPS. After 30 days of drying time, the EPS had dried to 0.7 percent moisture by volume, while the XPS still contained 15.7 percent moisture. 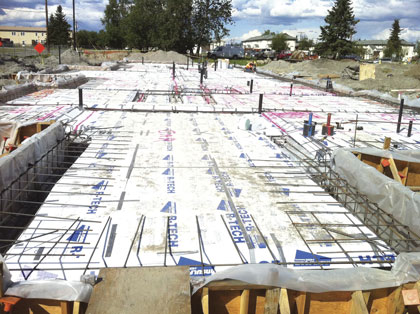 Featured Image: EPS insulation improves a building’s thermal performance, while also protecting the foundation against damage from freeze-thaw cycling.
Above: Below-grade insulation is important for energy efficiency in both hot and cold climates.
Photos courtesy of Insulfoam.
THERMAL PERFORMANCE (R-VALUE)
As mentioned before, moisture significantly impacts insulation’s thermal performance. Of note, the Stork Twin City Testing Laboratory 15-year in-situ evaluation discussed previously found that EPS retained 94 percent of its specified R-value, whereas the XPS only retained 52 percent of its R-value.
In addition to drying quickly and having minimal long-term moisture retention, EPS also does not experience “thermal drift.” This means that EPS insulation retains its published R-value during its time in service. This is because it is made with blowing agents that do not diffuse over time.
COMPRESSIVE RESISTANCE
In the same way it seems logical that dirt would adequately insulate a building, one would think that a concrete floor slab would squash rigid foam insulation installed underneath it. Although insulation’s compressive strength is important, often the insulation installed below concrete slabs is over-engineered, which wastes money and provides no significant performance advantage.
This issue is that a common engineering assumption overstates how much load is transferred through the slab to the insulation. Instead of transferring in a triangular fashion as is typically calculated, research shows that concrete slabs distribute loads more evenly. As a result, a lower compressive resistance is often needed for an insulation, which can dramatically reduce material costs.
To avoid an unnecessary hit to your bottom line from over-engineered insulation, confirm if the project engineer used calculations based on the Theory of Plates on Elastic Foundations. The formula in this theory takes into account how slabs and insulation behave together. For more information, see Technical Bulletin No. 1009 on www.insulfoam.com.
CONCLUSION
Although below-grade insulation is out of sight, its benefits to a building’s energy efficiency can be “outtasight!” The key is to consider the insulation’s moisture and thermal performance, and to evaluate if a lower compressive resistance product will save you money while performing as needed. In addition to EPS’s demonstrated performance as below-grade insulation, the material’s moisture resistance and compressive strength also are confirmed by its use as geofoam in a range of building and heavy construction projects. ■
For More Information:  Michael McAuley is the president of Insulfoam. McAuley has more than 20 years of experience in building material sales and production management, including 14 years at Insulfoam’s sister company, Versico Roofing Systems, as the national sales manager and general manager. www.insulfoam.com.
_________________________________________________________________________
Modern Contractor Solutions – September 2016
Did you enjoy this article?
Subscribe to the FREE Digital Edition of Modern Contractor Solutions magazine.