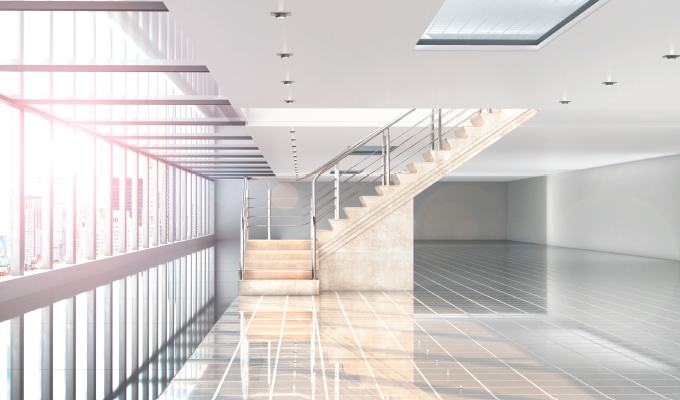 Construction professionals have a golden retrofitting opportunity as commercial facilities expand their precautions against viruses: an effective new type of “germicidal” LED fixture that can be quickly and easily installed in existing structures. This specialized, enclosed LED fixture draws in air and irradiates it with ultraviolet light (UV), significantly improving indoor safety by providing continuous disinfection of airborne viruses as well as bacteria and germs. While traditional UV fixtures have been used for many years to clean surfaces, they could not be safely used in occupied spaces. The new type is designed to safely and constantly disinfect indoor air in occupied rooms.

Although LED light fixtures normally emit non-harmful visible light with a 400nm-700nm wavelength, lower frequency ultraviolet (UV) light LEDs can effectively kill such pathogens. UVC, a powerful ultraviolet light wavelength between 180nm-280nm, is viricidal, bactericidal, and fungicidal since it passes through the outer wall of the pathogen and causes damage at the molecular level. The destruction ultimately leads to inactivation of the pathogen, making the cells unable to reproduce.

UVC is known to disinfect air, water, and nonporous surfaces and has effectively been used for decades to reduce the spread of bacteria such as tuberculosis, influenza, and Legionnaire’s disease. According to the CDC, UVC is the only recognized technology for effective germicidal treatment for airborne pathogens.

The CDC has also determined that the integration of in-room UVC sources in conjunction with building-wide HVAC systems has great promise, particularly given the growing knowledge of the dangers of airborne viruses. Best of all, these stand-alone UVC fixtures can be used continuously throughout the day, in occupied rooms, even when the HVAC system is off.

“For easy retrofitting by the construction trade in indoor settings, individual room air can be continuously recycled while safely treating it with UVC radiation and eradicating airborne viruses, says Michael Fischer, president of Energy Harness Corporation, a Florida-based designer and manufacturer of LED lighting for a variety of commercial settings. “Unlike traditional wide spectrum fluorescent or mercury vapor UV tubes, LEDs can produce UVC by controlling the specific wavelengths of light emitted. In addition, they don’t contain extremely toxic substances like arsenic or mercury that are inherent in the traditional UV tubes.”

Prior to the pandemic, Energy Harness responded to the demand for hydroponic “grow” lighting, and designed LED lights with color spectrums (including UV) to mimic sunlight. When the COVID pandemic began, Fischer says his team quickly realized the potential effectiveness of UVC technology to deactivate viruses and used the technology to design a fixture to treat the airborne organisms.

However, to do this requires technology that can safely deliver the proper UVC dosage in a specific combination of three main factors: dosage, distance, and wavelength.

According to Fischer, to eradicate pathogens effectively, the UVC wavelength should be in the germicidal effective range, with a peak of approximately 268nm. The intensity must be high enough to irradiate the space, and the duration must be long enough to affect the organism. He spells out the equation as (Wavelength Intensity * Duration) = Dosage Delivered.

After significant R&D, the LED manufacturer developed a ceiling mounted UVC system called Active-Airflow that circulates room air many times per hour into an enclosed chamber, where UVC disinfection occurs.

Due to its unique patent pending design, the unit allows for an exceptionally long exposure time. The internal germicidal chambers are filled with hundreds of high-powered LEDs arranged in very close proximity to the airborne pathogens as they move through the fixture.

With the intensity, the distance and the time measured, Energy Harness can effectively “control” the UVC dosage. In addition, the LEDs in the unit irradiate in the most effective germicidal range (with a 260-280nm wavelength).

SAFETY IN A SECOND

When the Active-Airflow LED fixture was tested by Intertek Laboratories (ETL), a nationally recognized testing laboratory (NRTL), it was shown to be 99.9% effective in eliminating airborne pathogens. Further laboratory testing directly on the SARS-CoV-2 virus has shown the LED technology produced in the Active Airflow fixture showed a 99.998% inactivation of the virus—within one second. A virus reduction rate of 99.999% is the maximum sensitivity that the testing mechanism could measure.

“To know that our technology maxed out the testing equipment, that’s a pretty exciting moment,” says Peter Lehrer, senior vice president for project development at Energy Harness. “It says that we’ve got the ultimate virus killer on our hands.”

Because the unit houses the UVC LEDs internally, it does not produce any visible light in the room it disinfects. With the unit mounted in the ceiling, the people occupying the space are completely shielded from the UVC. Each LED fixture can typically disinfect a 256-square-foot area, depending on average occupancy, occupant activity level, etc., and multiple units can be deployed in larger rooms, according to Fischer.

Contractors in the construction and retrofit business should know that when installed in standard ceiling grids, the pathogen inactivating UVC LED fixture can be used continuously through the day in occupied rooms. This enables constant airborne disinfection of the air throughout the area.

Although this UVC LED unit works independently from the HVAC system, it still uses active air handling to draw room air into the unit. The standalone approach of the disinfection system could make it simpler for most facilities to install. The unit is designed to fit into a grid ceiling much like a troffer luminaire and takes up the same space as a single 2×4-foot ceiling tile.

The bottom line for construction professionals is that they have an important new opportunity retrofitting commercial facilities, making indoor areas safer with occupants still in the room. The incorporation of fixtures that can continuously kill airborne pathogens will be vital to aid safe operation.

Del Williams is a technical writer who lives in Torrance, California. For more about LED technology with Energy Harness, visit energyharness.com/uv/.