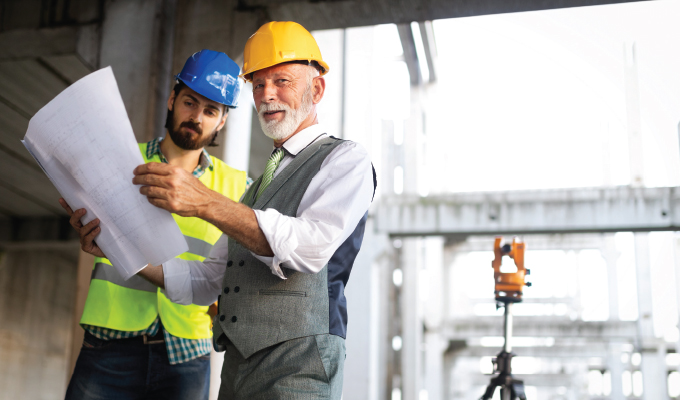 Construction company succession can be challenging at the best of times, but that transition is often made significantly more complicated when a firm’s owner fails to properly consider the wealth planning implications of such a move.

Four out of five family businesses don’t have a succession plan, and among general contractors, the situation can be even worse. That’s because many construction company owners operate as charismatic leaders who figuratively carry the firm on their back, bringing in contracts and inspiring workers all at the same time.

After decades of leading from the front, many owners struggle to adequately plan to pass the company on to the management team or the next generation of the family. Exacerbating matters, owners often rely on their salary as their principal source of personal cash flow, failing to consider the wealth management implications of leaving the company they built or how they will live without that steady paycheck.

But it doesn’t have to be this difficult. Following these five steps can make succession a lot easier and fairly stress-free.

Successful succession plans start with the owner deciding what’s next—a conversation that should begin 5 to 10 years in advance. Too many owners sell to the next generation and then show up for work the following week, undermining the new management. Owners must decide what they want to do with their time in retirement and how much money is needed to fulfill those goals. Some choose to manage a real estate portfolio, others want to travel, spend time with grandchildren, and live off investments. Each option has different wealth planning implications as the owner considers future cash flow needs. If we consider the owner as a frog, he or she needs a lily pad to jump to, otherwise, they will simply return to work.

Owners should diversify their personal balance sheet to separate three assets—the operating company, real estate holdings, and liquid investments, such as stocks and bonds. Once those three assets are separated, each can be built up over several years. Construction companies often hold more assets in real estate than they initially recognize. For example, a firm that built a five-story office building 20 years ago and occupies one floor while renting out the other floors to tenants may be sitting on a valuable property with a significant income stream. Many firms also own their construction yards. Separating and diversifying assets makes succession significantly easier, giving the owner the option of selling the operating company and its capital assets, retaining real estate holdings as a “job,” while having investments to supplement that income.

Occasionally, construction companies hold excessive levels of equity on their balance sheet that may not be required by stakeholders, but is simply left in the company. Construction companies, even when operated masterfully, are still risky businesses that should not hold excess capital that is not driving a proper return on investment. Working with the company’s stakeholders, such as surety, bonding agents, and bankers, can lead to a proper capital plan that supports operations and succession, allowing the owner to shift assets into real estate and/or liquid investments. Once that conversation is finished, owners should be disciplined in taking excess cash flow out of the operating company and putting it to work elsewhere rather than reinvesting it in the business or spending that cash. That capital can remain available to the business in the event of an economic downturn.

Succession plans can become stuck over issues of control, particularly when the departing owner is carrying a note, meaning their payments for the sale take place over several years based on the firm’s ongoing success. To overcome this challenge, firms can restructure their shares into two classes—ownership shares and voting shares. The outgoing owner can pass on 100 percent of the ownership shares to the new management team while retaining 51 percent of voting shares until such time as their note is fully paid out. Such a structure heads off crucial anxiety that can undermine succession plans. There is oversight to protect the former owner’s interest but lessens the temptation to get involved in the day-to-day management decisions.

Finally, anyone who remembers the financial crisis of 2008 and the tough years that followed knows that the best-laid plans can go awry. So, succession plans should include flexibility to ensure that meeting the financial obligations don’t undermine the firm’s financial well-being. For example, if the owner has a note that pays interest and principal over 10 years, that contract might reduce payments to interest only for the duration of a financial crisis. That flexibility only works if the new owners are transparent, sharing any information about upcoming challenges with the outgoing owner as soon as that information is available. It is acceptable to clearly state that payments will be modified if needed to protect the company.

I’ve written before that when most construction leaders wonder, “How do I get out,” it’s too late to sell their firm for more than book value. However, owners that take these five steps will find that succession planning can produce a meaningful sale of their company while safeguarding their professional legacy and also securing their financial well-being in retirement.

Shane Brown is a partner at Plante Moran (www.plantemoran.com), leading the construction practice for the Rocky Mountain region.