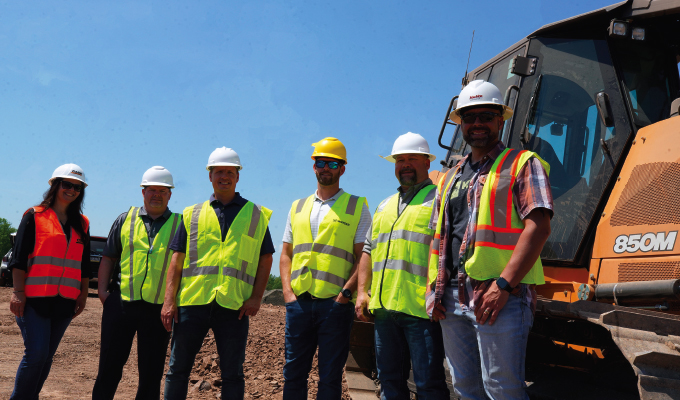 Dirt work is in Brian Golden’s blood—and the connection to each generation of his family is present every day at MacMor Construction LLC. Founded in 2013 and named after his daughters—Mackenzie and Morgan—MacMor started as a three-man crew and has grown into a sitework and heavy highway powerhouse with 46 full-time employees.

“My father was a general superintendent back in the day,” explains Golden. “He’s actually still involved today—he’s come on and he runs the field operations for me now. This has been something that’s been in my blood forever, and it’s just, I like the work. I like the equipment; I like dealing with the owners … it’s just what I do.”

One of the company’s current projects is a 112-unit townhome development in Gettysburg, Pennsylvania, called the Gettysburg Overlook. Once the site clearing, grubbing, and grading are complete, the company will also perform the utility work.

MacMor relies on CASE 850M dozers for the bulk of its sitework because they can perform both bulk earthmoving activities as well as detail work—cutting and filling, pushing dirt and fine-grading for building pads, parking lots, and more.

The 850M is a mid-size dozer (112 hp, 22,750 lbs in the wide track configuration) that also provides Golden with flexibility both in the type of work it does, as well as its transportation and access to each site.

“You’ve got a machine that has the power and ability to do what you need it to do. But it also keeps me under the fact of having to run permits to haul it, which is huge for us.”

“That was one of the reasons why we looked at the second 850M was for that ease … of the transportation to get it from job to job.”

The CASE 850M dozer features best-in-class drawbar pull of 42,813 lbs and a Tier 4 Final FPT engine with fuel efficient Selective Catalytic Reduction (SCR) technology. It also features a hydrostatic drive system and an advanced load management system that automatically reduces track speed (increasing torque) with a heavier load on the blade, and increases track speed (reducing torque) with a lighter load on the blade—ensuring that the machine is working at optimal power and efficiency at all times.

“This machine is very, very fuel efficient,” says Golden. “I mean, right now in this market, we have to watch all of our dollars and cents down to the fuel costs, and we see that rising continuously. So that goes into a lot of our decision making also is what’s the fuel efficiency of the machine. We have an older dozer that just eats right through it. Where this machine here, I can run probably 2, 3 days without really having to think about the fuel on it, which makes it nice. So, it’s a benefit for us on that side of things as well.”

In addition to the smooth controls and excellent visibility, Golden says that, for its size, the 850M packs enough power to handle heavy-duty applications.

“The power of these machines is great. I mean, you can put it in a cut-the-fill area and not have issue with it. As we move forward on this project, we’re going to minimize some of our heavier equipment to go to another project. So, our 850, we’ll keep here with [our] excavators and haul trucks. And we’ll actually use that machine in a heavier application at that point, which it will … I have no issue with it performing.”

The 850M deployed by MacMor also features factory-fit CASE SiteControl machine control solutions powered by Leica Geosystems. For Golden, this simplified the acquisition process by allowing him to group the precision solution in with the purchase of the machine. It also combined all elements of the investment into a single payment, financing package and interest rate.

“It’s simplified ordering,” he says. “The dozers that are coming out [now], you almost have to have it on them. It just takes that guesswork out of what we need and the questions of what the machine has. It’s better to know right off the bat it’s coming out with it. It should be a standard. That’s just where we’re at with things, especially on the finish side, because of what the application is with the dozer.”

Machine control provides a number of operational and business advantages.

“Our machine control was something I wasn’t 100% sure of at first. It’s been an evolution,” he explains. “We [ask ourselves] how can we be more competitive with production on jobs, and that led us to now go to the machine grade control.”

“Looking at production and hitting schedules and deadlines,” he adds. “This is going to come in handy for that side of things for us.”

In addition to the productivity gains, Golden has also seen advantages in lower operating costs.

“It takes us from having a surveyor out on the project, putting in hundreds of stakes that have the potential of getting knocked over—which in essence, we always use a rule of thumb that each stake costs you about 75 bucks. So, it doesn’t take long, if you knock over 100 of them, that’s $7,500 quick. So, to put the machine control in it, that takes that out of it also.”

“And then it takes the questions out of it of what it’s supposed to look like. Our guys can see it more with a screen and seeing what they’ve got going on there.”

Golden also sees an advantage to the dozers being outfit with machine control from the factory when he eventually turns that machine out onto the secondary market.

“So, you look at the value of the machine here after X amount of years, and then you look to spin out of it and go to a new one. That makes that machine that much marketable for the next guy,” he says. “Here’s a machine. It’s fully integrated. It’s ready to go. That’s, I think, the advantage of these dozers this way.”

The 850M comes standard with CASE ProCare, which includes a factory warranty, a planned maintenance contract, as well as newly enhanced CASE SiteWatch™ telematics that provides insight into machine performance, maintenance intervals, and more. MacMor has partnered with CASE dealer Groff Tractor & Equipment for their equipment and service needs.

“I turned to Groff back in 2013 and those guys have been by my side ever since,” he says. “The support, the service side, anytime we called, those guys work right with us to help us on anything that we need. The sales staff and the support we have with them has been great as well. I can’t ask for a better group to help us.”

Groff Tractor & Equipment is a CASE SiteControl-Certified dealer with a full-time machine control specialist on staff (Kyle Sarvis), along with trained technicians and parts support. This kind of support has been critical for onboarding new machine control components and getting all of MacMor’s machine control systems working together.

The support provided by Groff also gives Golden the extra confidence to deploy this new technology in the field.

“You got to have that confidence in the gentlemen coming out to do that set up for you,” he explains. “We have guys that have some experience with it, but as for the initial setup and understanding it, it’s best to rely on the folks that have that person to do that work.”

BUILDING INTO THE FUTURE

Starting as a three-man crew and growing to 46 employees has taken a lot of hard work and dedication, and Golden has his eyes set on further growth in the future. “Our future’s based on what the market’s doing,” he explains. “We keep an eye on it every couple of months to see how things are shifting. In the public sector we’re watching to see what’s going on there with municipalities, boroughs, budgets, and state budgets. And then we keep in close communication with our developers, as well. So that way we can figure out which direction we have to shift, and which way we have to go for the continued future for our company.”

“I’m just proud of the growth that we’ve had,” he concludes. “I look at where we came from to where we are today … and then the relationships that we’ve built with people over the past 8 years. It makes me feel really proud of what we’ve done here.”