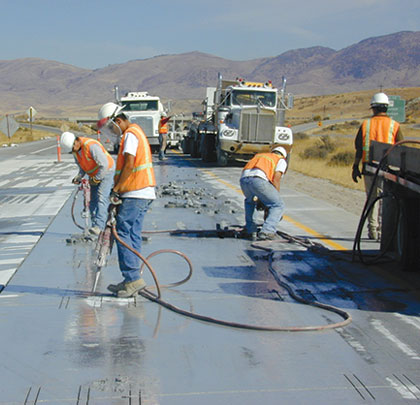 By Kari Moosmann
In 2011, the concrete pavement restoration/preservation industry celebrated the 20th anniversary of the first high-production, large-scale dowel bar retrofit (DBR) project constructed by the Washington State Department of Transportation. This project utilized specially designed machines that allowed for the placement of hundreds, even thousands of DBR’s in a single day making it a cost-effective and viable preservation treatment. What many people don’t know is that the DBR process was actually envisioned and developed nearly 10 years prior to its optimization in Washington. With early research in Georgia dating back to the 1980s, dowel bar retrofit (DBR) has reached its 30th anniversary in 2012 as an essential pavement preservation tool.
SUCCESSFUL RETROFITTING
This method of retrofitting load transfer devices across transverse joints and cracks in concrete pavement has been used successfully on thousands of (lane) miles in the U.S. with more than 6.5 million dowel bars installed during the past 30 years.
The first installation of DBR was completed in 1981 on I-75 in Georgia as part of a research study to determine how to reestablish load transfer in existing PCC pavements. The Georgia Department of Transportation became interested in improving the load transfer capabilities of existing PCC pavements after observing the refaulting of pavements following diamond grinding and concrete pavement restoration (CPR). It was felt that the effectiveness of CPR could be extended if load transfer could be added at the joints. The goal was to develop construction procedures for adding load transfer to existing pavements and to evaluate the effectiveness of the methods. Various load transfer devices were placed by maintenance forces in a total of 461 joints on I-75 between Atlanta and Macon in 1981 and some additional installations were done in 1982. Almost 3 miles were repaired through the extensive effort. The DBR concept was developed during this research study by cutting the slots, placing smooth steel dowels within, and backfilling using various slot filling materials. The follow-up evaluations concluded that dowel bars were the best solution to establishing load transfer to existing joints.
“We are excited to see that after 30 years, DBR is being used by even more municipalities as an environmentally friendly, economic, long-term repair,” says John Roberts, executive director of The International Grooving and Grinding Association. “This technique has spread throughout the U.S. and Canada as a viable means of preserving concrete roadways.”
RESTORATION OF LOAD TRANSFER
DBR is a CPR technique that restores load transfer capability of existing jointed concrete pavement by the placement of dowel bars across joints and cracks that exhibit poor load transfer. The retrofit dowel bars ensure that the traffic load is shared between adjacent panels, preventing differential vertical movement of the slabs at the joints and cracks, thereby eliminating the formation of faults or step-offs. These faults are the cause of the rough ride and wheel slap that is sensed when traveling on a concrete roadway that has lost its ability to transfer load from one panel to the next.
Since its inception, numerous states have successfully used DBR to address faulting in older jointed plain concrete pavements. The proper approach is to saw cut and jackhammer out the slots for the dowels. Following dowel placement, the slots are then typically backfilled with a non-shrink concrete grout and the pavement is diamond-ground to restore smoothness.
“The evidence of DBR’s effectiveness is there, revealed through time and experience,” says Roberts. “DBR will continue to grow as municipalities look for more cost-effective solutions to meet their growing need for infrastructure repairs.”
TIME-TESTED AND TRUE
DBR repairs have proven that they will last from 15 to 20 years and likely even longer as documented by states that monitor their DBR projects. The method is environmentally friendly as it repairs the existing pavement with very little new natural materials required. Also, keeping the pavement’s light concrete surface reduces the heat island effect as these pavements reflect more light than dark asphalt surfaces, which in turn reduces roadside lighting requirements.
Projects can be completed during off-peak hours with short single lane closures allowing the roadway owner to repair only the lanes that show distress. Other overlay treatments require the entire roadway to be treated and do not treat the problem at the source. DBR is a cost-effective repair treatment since it is only applied to the faulted lane, while an asphalt overlay would be required on all lanes and shoulders, significantly increasing costs unnecessarily. When utilizing the asphalt overlay option, guide rails, overhead signs, and bridges may need to be raised, increasing overall project costs.
Following the installation of the DBRs, the surface of a roadway is then diamond ground to restore and improve smoothness. This process also enhances surface friction and safety while significantly reducing tire/pavement noise. Diamond ground roadways typically have a smoothness level equal to and often better than original construction. ■
For More Information:
The International Grooving and Grinding Association (IGGA) is a non-profit trade association founded in 1972 by a group of dedicated industry professionals committed to the development of the diamond grinding and grooving process for surfaces constructed with Portland cement concrete and asphalt. For more information, visit www.igga.net.
_________________________________________________________________________
Modern Contractor Solutions, February 2013
Did you enjoy this article?
Subscribe to the FREE Digital Edition of Modern Contractor Solutions magazine.