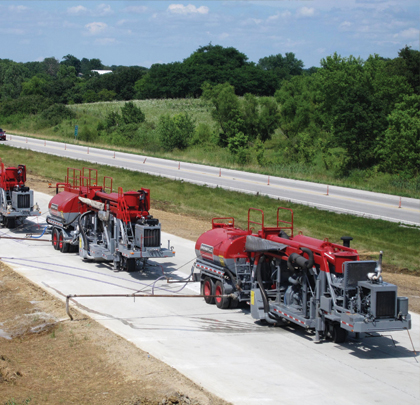 An area of focus within the construction industry throughout the past few years has been the question of how to handle concrete grinding residue (CGR), also known as sawing slurry. Generated during sawing and diamond grinding operations, slurry is the byproduct created when a diamond blade’s cooling water mixes with concrete fines.
Oftentimes, governmental regulations dictate onerous slurry disposal procedures without knowing what the material really consists of. This can turn into a time-consuming task for construction workers and it unnecessarily increases costs for the taxpayer. To address the multifaceted issue of slurry disposal, the International Grooving & Grinding Association (IGGA) developed recommendations based, in part, upon research conducted in partnership with North Dakota State University (NDSU).
SLURRY BEST MANAGEMENT PRACTICES
Slurry Spreading Disposal
In rural areas that have vegetated slopes, slurry can be deposited on the slopes as the grinding operation progresses down the road. As a part of the contract documents, it is incumbent upon the engineer to identify wetlands and other sensitive areas where slurry discharge operations are not permitted; the spreading of slurry should not take place through these sensitive areas.
The spreading start and stop points need to be clearly marked on the shoulder of the road. Slurry generated while grinding in unpermitted areas should be picked up and hauled for disposal in non-sensitive areas on the job. The slurry should not be allowed to flow across the roadway into adjacent lanes.
The diamond grinding equipment should be equipped with a well-maintained vacuum system that is capable of removing all standing slurry, leaving the roadway in a damp condition after the grinder passes. The vacuumed material should be spread evenly on the adjacent slopes by dragging a flexible hose or other approved device along the slope.
Ground application of slurry should not take place on the shoulder, but should begin a minimum of 1 foot from the shoulder with each pass of the grinder moving the spreading operation farther down the slope to ensure no buildup of grinding residue. The slurry should not be spread within 100 feet of any natural stream or lake or within 3 feet of a water-filled ditch. Efforts must be taken to restrict the spreading operation to above the high-water line of the ditch.
At no time should grinding residue be allowed to enter a closed drainage system. The contractor is responsible for providing suitable means to restrict the infiltration of the grinding residue into the closed drain system.
Slurry Collection and Pond Decanting
In urban and other areas with closed drainage systems, the slurry should be collected in water-tight haul units and transported to settlement ponds constructed by the contractor. These ponds may be constructed within or outside the right-of-way. All locations should be approved by the engineer. The ponds should be constructed to allow for the settlement of the solids and decanting of the water for reuse in the grinding operation.
At the completion of the grinding operation, the remaining water may be used in a commercially useful manner (i.e., dust control, lime stabilization). Any water left in the pond is typically allowed to evaporate. After drying, the remaining solids may be used as a fill material, a component in recycled aggregate, or any other commercially useful application. The pond area should be reclaimed to its original condition and vegetated to protect against erosion.
In geographic regions where evaporation is slow to occur, newly introduced drying and solidification agents can be used to accelerate the cleanup operation. One such product is SlurryDry™, a new product by CETCO Energy Services, which can be added to the settlement pond at 1 or 2 percent of total liquid volume in order to assist with reclamation. The product has been extensively tested in the sawing, drilling, and floor polishing market, but is just now being introduced to the highway grooving and grinding industry. SlurryDry consists of a granular, super-absorbent polymer which solidifies free water, leaving the solids behind.
For sawing applications, the polymer is placed around the perimeter of a work area to solidify slurry for non-hazardous disposal on the jobsite. After applying the product, which has a strong capillary action, mixing can speed up absorption by allowing moisture to come into contact with the polymer crystals. Once the slurry has solidified into a gel-type solid, it can be shoveled or vacuumed up on flat sawing applications. After solidification, remaining residue can be vacuumed or dry swept. As an alternative to spreading it across the worksite, the product can also be used to solidify slurry inside wet vacuums.
SlurryDry was recently tested as a trial run during repair work at O’Hare International Airport. The product was sprinkled around the perimeter and as slurry gathered on the worksite, it was squeegeed into this perimeter. The slurry solidified to a gel-like substance within 5 minutes, and runoff was retained within the work area. After the work was completed, the slurry was swept into a pile for easy removal. The process proved to be quick and easy.
In a slurry pond application, SlurryDry can be dispersed into the settlement pond and mixed with the excavator or backhoe bucket. Within 5 minutes, the solidified waste can be dealt with in a locally approved manner for fast closure and reclamation of the area. ■
About the Author:
The International Grooving & Grinding Association (IGGA) is a non-profit trade association founded in 1972 by a group of dedicated industry professionals committed to the development of the diamond grinding and grooving process for surfaces constructed with Portland cement concrete and asphalt. In 1995, the IGGA joined in affiliation with the American Concrete Pavement Association (ACPA) and in 2012 formed the IGGA/ACPA Concrete Pavement Preservation Partnership (IGGA/ACPA CP3). For more information, visit www.igga.net.
_________________________________________________________________________
Modern Contractor Solutions, January 2014
Did you enjoy this article?
Subscribe to the FREE Digital Edition of Modern Contractor Solutions magazine. 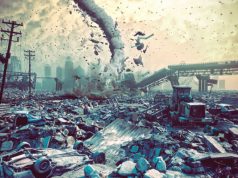 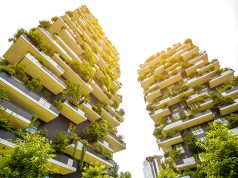