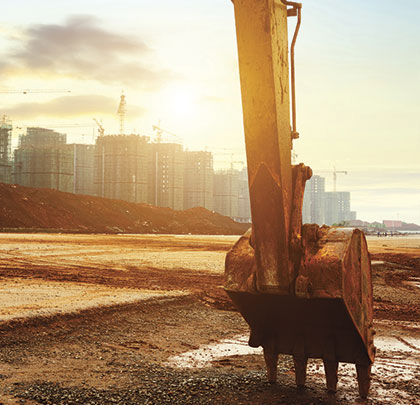 Relying too much on a single customer, or a single source of income, can put a business at risk. If your customers’ needs change or they go out of business, you’re left unprepared and struggling to remain viable. Public works projects can add much-needed stability to a construction company’s financial base and present a huge opportunity for both general contractors and subcontractors.
ADVANTAGES OF GOVERNMENT CONTRACTS
Reduced risk. Contractors who have worked on privately funded projects have no doubt run into at least one instance where the project fell through, leaving them with invoices to pay and no money to pay them. When you work on government contracts, pay may be slow—but it’s certain.
Financial advantages for company owners. There are specific laws relating to benefits (health insurance, retirement plans, voluntary benefits) for employees who work on government contracts. These regulations help create financial stability for hourly workers, and when understood and used correctly, allow company owners and key employees to save more for retirement as well.
Better pay. Wages on government contracts are set based on surveys conducted by the U.S Department of Labor (DOL), and tend to be higher than wages paid for the same job classifications on privately funded positions.
GOVERNMENT CONTRACTS CHALLENGES
Working on government contracts isn’t easy. These projects are funded with taxpayer dollars, and are therefore subject to what can seem like a labyrinth of regulations.
Fortunately, there are experienced partners available to assist companies with compliant solutions. Here’s a quick overview of laws that can create confusion for contractors.
The Davis-Bacon Act
Federal construction contracts worth more than $2,000 fall under the Davis-Bacon Act. This law requires companies who perform work on these contracts to pay locally “prevailing wages,” including the “anticipated cost of prevailing benefits.” Prevailing wages are set by the DOL and are included in the bid specifications of covered contracts.
Required wages are usually expressed as a per-hour wage and per-hour cash equivalent value of benefits, often based on a union scale. While federal jobs fall under the Davis-Bacon Act, most states also have “mini Davis-Bacon” regulations in place for the large amount of state funded prevailing wage work.
The Affordable Care Act
As of January 1, 2015, compliance with the employer-shared responsibility provisions of the ACA applies to companies with 100 or more full-time employees (FTEs). Those same requirements will apply to companies with 50 to 99 employees on January 1, 2016. The complexities of the ACA can be especially confusing for companies that have seasonal employees, as many contractors do.
THE WORD ON WAGES
Wages for workers on government jobs are set by the DOL, and include both a base wage and an amount for “bona fide” fringe benefits. Contractors who work on Davis-Bacon contracts have the option to either use the fringe amount to provide benefits—such as retirement, medical, dental, vision, and life insurance plans—or to pay the amount to workers as additional cash wages. There are distinct advantages to using fringe dollars to pay for ACA-compliant health insurance. Many companies that work on Davis-Bacon projects start by paying for health insurance (especially now because of the ACA employer mandate), then allocate the remaining fringe dollars to retirement plans and supplemental benefits.
Some contractors, especially those new to public works jobs, pay out the fringe as cash wages because they believe it’s the simplest way to comply. It’s actually the most expensive way to comply, and robs contractors of huge savings on payroll costs—savings that result in more competitive bids and improved chances of winning contracts. Keep in mind that the fringe is an EMPLOYER contribution, so it is the business owner’s decision as to how to meet the fringe obligation.
Here’s how it works. When contractors use the fringe portion of the prevailing wage to provide “bona fide” benefit plans for their workers, those dollars are removed from the payroll, making them exempt from payroll taxes such as FICA, FUTA, and SUTA, and in most cases, workers’ compensation and general liability insurance. While rates vary from state to state, a conservative estimate is that these taxes represent an additional 25 cents on each dollar paid as cash wages.
The more fringe dollars used to provide benefits, the more savings realized. Savings on payroll also reduces your bid costs, enabling you to be more competitive for the sought after prevailing wage work, which typically goes to the lowest bidder.
SUMMARY
Contractors who are looking for a niche with some stability should consider publicly funded jobs. In 2014, the value of government-funded construction contracts was $275 billion, and after peaking in 2009 as a result of ARRA, has remained at a fairly consistent level. Furthermore, laws regarding benefits paid to hourly workers on contracts subject to the Davis-Bacon Act can create significant savings on payroll costs over the life of a contract and present opportunities for company owners and key employees to save more for retirement. While it’s true the laws and regulations that apply to publicly funded jobs can be complex, there are experienced and reliable partners available who can assist contractors in complying with these laws. ■
About the Author: Adam Bonsky is EVP of government markets for Fringe Benefit Group, which has been helping the construction industry design and administer fringe benefit programs since 1983. For more information on its prevailing wage benefit plan, The Contractors Plan, and bidding on government jobs, visit www.thecontractorsplan.com. Adam may be reached at 800.662.6177 or abonsky@fbg.com.
_________________________________________________________________________
Modern Contractor Solutions, September 2015
Did you enjoy this article?
Subscribe to the FREE Digital Edition of Modern Contractor Solutions magazine.