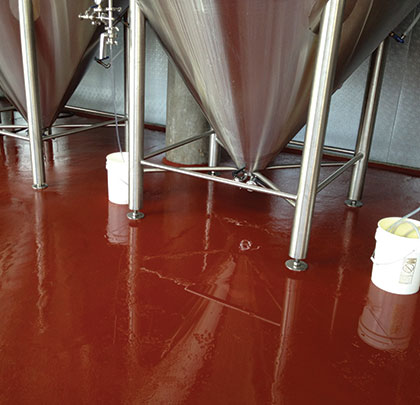 Eurethane Flooring System Perfect for Brewery Floor
Exile Brewery is a tribute to the Tursi Family’s patriarch and all other immigrants that continue to embrace the American dream. Joseph Tursi, after the move 6 weeks at sea, saw the Mother of all Exiles standing tall with her burning torch. The sight of Lady Liberty greeting the ship as they pulled closer towards shore dissolved any apprehension he had about coming to a new land. Joseph and countless other exiles obeyed the command given by Lady Liberty and burned bright. Hence the motto for Exile Brewery, “Burn Bright,” along with its logo of Lady Liberty’s hand and torch.
The Tursi family’s search for the perfect facility to house their latest project came to an end when they discovered the FW Fitch Soap Factory Building. Built in 1929, the F.W. Fitch Company dominated much of the shampoo industry in the U.S. from the 1920s through the mid-1940s. The building, however, came with many challenges. In true Tursi spirit, all the challenges were met head on with optimism and hard work.
FLOORING CHALLENGE
One of the many challenges for the brewery was to properly slope the floors in the brew house and the fermentation room to allow for drainage. The other challenge was to use a flooring product that would hold up to the strong cleaners and hot water used to clean the vats after each brew. The floor had to be slip resistant, as it would almost always be wet. For this daunting task, Ball Team called upon Speck USA of Des Moines, Iowa, to manage the flooring part of the project. Jeremy Speck from Speck USA was the project manager for the flooring project. Jeremy called on Kevin VanElsen from 515 Decorative Concrete Supply Co. to come up with a budget-friendly mix to perform the floor sloping in the brewery. The conditions called for a system that would cure quickly so the ROCK-TRED Rock-Crete SL urethane cement product could be installed as the final wear surface of the brewery.
Before any products could be installed, the floors of the old soap factory were in a desperate need of a good cleaning. Over the years, dirt and grime had built up on the floor and needed to be removed. First, the floor was scrubbed with a solution from SureCrete Design Products called Super Concrete Renovator or SCR for short. SCR is a mild acidic detergent that etches and thoroughly cleans concrete surfaces in preparation for subsequent overlays. The SCR removed the old dirt and grime and made the slab ready to shot blast. The floor was then shot blasted to prep the surface to a CSP 3 profile for the sloping material.
SLOPING MATERIAL
Now that Speck USA had a clean substrate to install the sloping material, a construction laser was used to map out the varying thicknesses of the floor to ensure water would drain. There were multiple drains throughout the room. The area in between each drain had to be raised to allow the water to flow to the floor drains. The thickness of the sloping material varied greatly from almost 4-inch thick along the outside walls to as thin as 1/8-inch thick closer to the drains. Kevin Van Elsen from 515 Decorative Concrete Supply worked with SureCrete to come up with a mix design for the sloping material that would work well with that much variance. The product used was a blend of Deep Level and Flash Patch along with some limestone chips to bulk the mix up. The ratio was 4 bags Deep Level to 1 bag Flash Patch combined with 25 pounds of Limestone Chips. SureBond was used under the Deep Level to promote adhesion to the substrate. Deep Level and Flash Patch are two work horse products from SureCrete that are used in concrete restoration across the country. 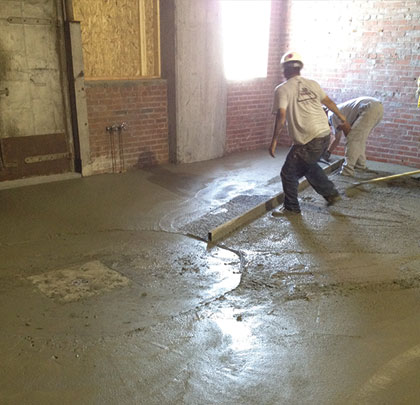 FLOORING SOLUTION
After the sloping was completed and allowed to cure for 48 hours, Speck USA started the installation of the ROCK TRED Rock Crete SL system. Rock-Crete SL is a high solids cementitious urethane flooring system that is applied as a self-leveling slurry with the use of gauge rakes from Midwest Rake. Rock Crete SL has a coefficient of expansion similar to that of concrete, allowing it to tolerate large temperature swings, or thermal shock, which is common in beverage processing and commercial kitchens. The floor was raked out to 3/16-inch and then broadcast to rejection with broadcast sand and allowed to cure. The following morning Speck USA returned to sweep up the excess sand from the previous day. The final step of the Rock-Crete system was to install the Rock Crete Dressing. Although this step is optional, it provides a more appealing finish and makes the floor easier to clean. In the commercial kitchen of the restaurant ROCK-TRED’s Tile Red colored Chem-Rock LV was used as the top coat. Chem- Rock LV is a 100-percent solids, low viscosity, 2 component epoxy coating.
After water testing to check the floors’ slope for proper drainage, the project could be considered a success. All areas of the floors passed this test. The entire team of contractors, suppliers, and manufactures came together to install a flooring system that would ensure the Exile Brewery would “Burn Bright” for many years to come. ■
For More Information:
For more information on Rock-Tred’s polymer coating solutions for your next commercial project, visit www.rocktred.com.
_________________________________________________________________________
Modern Contractor Solutions, April 2013
Did you enjoy this article?
Subscribe to the FREE Digital Edition of Modern Contractor Solutions magazine.