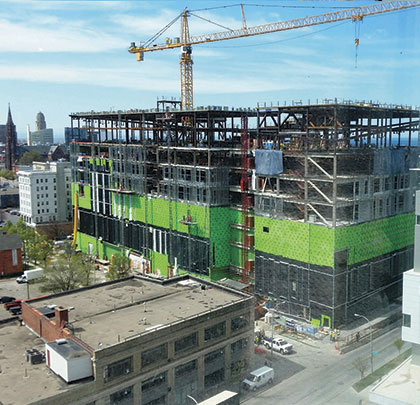 A seven-story atrium, 650,000 square feet of classrooms and labs, and a whopping $375 million budget: The University at Buffalo’s new Jacobs School of Medicine facility has been a lofty project, to say the least. The building’s mechanical, HVAC, and plumbing work—the heart of the facility—are a true testament to its enormity.

“At the peak of this job, we had about 170 of our workers on the site,” says Matt Peters, John W. Danforth Company project manager. “It’s the single largest contract we’ve ever executed in our 133-year history.”

Peters and his crew started Danforth’s portion of the medical facility construction during the spring of 2015, which included installing HVAC and plumbing lines throughout the entire 8-story structure. Hundreds of miles of pipe later, the terra cotta-clad building is now open to faculty and will welcome students for the spring 2018 semester.

Like many projects this size, efficiency was paramount to keeping things moving along and the Danforth team knew optimizing efficiency meant having the right equipment that would allow them to quickly and safely install the materials. 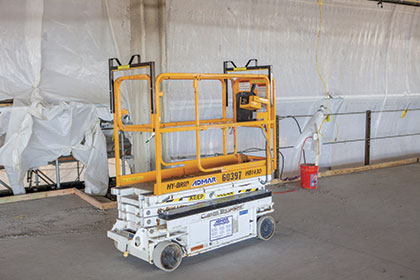 Featured Image: John W. Danforth Mechanical Contracting started its portion of the University at Buffalo’s new Jacobs School of Medicine project during the summer of 2015.
Above: Hy-Brid Lifts’ custom-designed pipe racks allowed John W. Danforth Mechanical Contracting’s team to transport materials from ground to ceiling for easy installation, cutting trips up and down the lift by a third and shortening installation time.

THE PROJECT SCOPE
“Scissor lifts are critical tools for our jobs,” says Michael Folaron, Danforth’s lead foreman. “We knew our standard 19-foot units wouldn’t be ideal for this project. We needed lifts that could easily get into and out of shorter, more confined interior spaces, as well as provide the capacity and set up that would ease the installation process.”

Much of Danforth’s work took place in areas with 15-foot ceiling heights where a standard 19-foot lift would have been overkill, created a crushing hazard, and been a challenge to maneuver. Danforth worked with ADMAR Construction Equipment and Supplies, a New York-based rental company, on a solution.

“We recommended the Hy-Brid 14-foot lifts because, like most jobs, the majority of the installations on this project didn’t call for a working height higher than 19 feet, which means a 12- to 14-foot platform height lift was sufficient,” says Jason Colby, ADMAR Supply territory manager. “The 14-foot lifts are compact so they’re easy to drive through confined spaces and there’s minimal crushing hazard risk. Still, they offer plenty of capacity for tools and supplies.”

In addition to maneuvering through numerous labs and classrooms across multiple floors, the crews had to use the lifts on future stair landings, which meant as many as six elevation changes on one floor. With a 19-foot lift Danforth would have had to use a fork truck to get the lift onto each landing, which would have added costs and hassle to the project. Instead, because the Hy-Brid lifts are relatively lightweight, the crew used chains to swing them up onto the landings.

“We saved time and money when it came to getting the lifts into the building,” Peters adds. “Our crew was able to use a hoist rather than rent a larger, more costly crane to lift the 1,645-pound lifts into the upper floors of the building.”

THE CHALLENGES
Perhaps the biggest challenge the Danforth crews faced came with the sheer amount of materials they needed to install.

“The facility may be similar to other buildings in size, but its network of pipes and ductwork were some of the most intricate we’ve installed,” Peters says.

Because of the facility’s shear size and its numerous labs and classrooms, Danforth had to install a variety of HVAC piping, including lines for hot, chilled, and condenser water, as well as high-pressure steam/condensate and fuel oil system lines. They also had many plumbing lines to install, including piping for domestic and tempered water, as well as cold and hot non-potable water. This was in addition to reverse osmosis and deionization, animal watering, storm/overflow, lab waste and vent, reclaim, and natural gas lines. And, finally carbon dioxide, oxygen, and nitrogen, as well as a medical vacuum and compressed air, had to be routed to each lab.

“It was a lot of material to load up and down with the scissor lifts,” Peters says. “Fortunately, Custom Equipment designed the units to make this task easier, safer, and more efficient.”

Custom Equipment LLC, which manufactures Hy-Brid Lifts, custom-engineered a pipe rack that allowed installers to haul the maximum amount of material in addition to two workers. Rather than weld the rack on top of the lift like an aftermarket system, which would have disrupted the machine’s balance and capability, Custom Equipment integrated the rack into the overall lift design. This meant it didn’t impact machine stability or safety.

The pipe racks could hold as much as 200 pounds, which allowed the installers to load them with multiple 20-foot pipes. This cut the number of trips up and down by one-third so installers could work faster and more efficiently. The custom pipe racks combined with the lifts’ low weight allowed two workers to be on the lift installing materials at once, speeding up production time, which would not have possible with aftermarket pipe racks because of how the racks are incorporated onto the lift.

At the height of the project, Danforth was operating around 57 Hy-Brid scissor lifts, which all were equipped with the custom pipe racks. The pipe racks worked so well the contractor also retrofitted several of its lifts already on site with them. 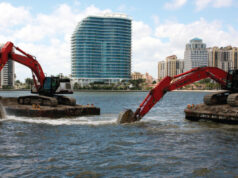 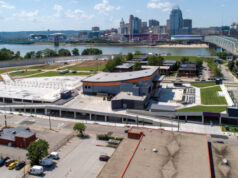 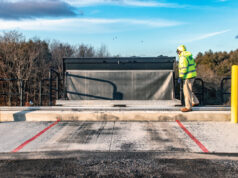