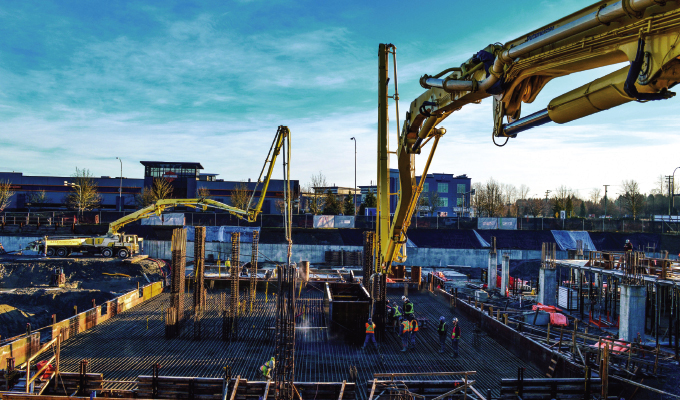 The $100 million regional office for First West Credit Union in Langley, British Columbia, is a welcome addition to a southwest Canadian city that takes pride in its tight-knit charm. To bring the impressive high rise structure to life, Vancouver-based A.J.’s Concrete Pumping was tasked with navigating a number of challenges that elevated the undertaking from ordinary to complex. From special setups and extended horizontal reaches to the need for lightweight outrigger support, proper equipment selection was of the utmost importance to meet the jobsite’s demands. That’s why A.J.’s called upon its reliable fleet of Putzmeister boom pumps to take on the project, with the 39Z-, 47Z-, and 56Z-Meter boom pumps brought into action.

THE SITE AND SETUP

The First West building is composed of slightly different linear forms that are bundled together to represent a cohesive collaboration. When the building is finished it will create a comfortable-yet-functional architectural statement that promotes pride of place and strength in unity. However, the building site demanded considerable problem solving from contractors.

Located on an extremely busy corner lot adjacent to the Trans-Canada Highway, the layout meant restricted access and precise operation to maintain safety and quality. In addition, the site was located on a large deposit of blue clay soil, which creates a slippery and unpredictable base for equipment. Though contractors would typically build a temporary roadway of crushed rock for ready-mix trucks to deliver concrete to the pump, this solution was not a sustainable option due to the volume of concrete needed to finish the job. This temporary solution would only allow for 10-15 ready-mix trucks to drive across it before it would need to be rebuilt. This pour called for about 140 truckloads of concrete.

In order to save time on rebuilding a temporary roadway, contractors stationed a 39Z-meter on the perimeter of the jobsite accessible to ready-mix trucks. From there, the 39Z-meter pumped into a 47Z-meter located closer to the footings. On the other side of the site, a suspended slab was fitted with additional re-shoring to hold a 56Z-meter.

The three-pump setup made it easy for crews to reach all sides of the pour, preventing equipment from getting stuck in the blue clay mud.

“The restricted site access made this a unique pour,” says Scott Sutherland, operations manager at A.J.’s Concrete Pumping. “Using our brand-new 39Z to pump into the 47Z got people excited.”

The scope of the job required the entire footing for the new building to be pumped in one day. Crews worked steadily to pour more than 49,440 cubic feet of concrete over an 8-hour span. In order to meet the deadline, A.J.’s Concrete brought a special piece of equipment from its fleet—the first of the new Putzmeister 39Z-meter boom pumps to be built in North America. The new high-pressured pump kept the job moving, delivering concrete through approximately 100 feet of slickline to the 47Z-meter. The slickline was secured with thrust blocks and high-pressure clamps to ensure safety and smooth delivery.

The redesigned 39Z-meter boom pump features a .13 HPD Pump Cell designed to be the highest-performing, longest-lasting pump cell on the market with a rod side output up to 180 yards3/h and rod side pressures of 1,233 psi.

“The performance of the new high-pressured pumping cell is amazing,” Sutherland says. “It delivers a smooth pour, even through hundreds of feet of slickline.”

EVERYTHING HAS A PLACE

From muddy blue clay to space and weight restrictions, A.J.’s chose equipment based on the site conditions. That’s why each pump was carefully selected for the restrictions of the jobsite.

“The general contractor specifically requested us to bring our 56Z for the light outrigger load and horizontal reach,” says Sutherland. “The 56Z was perfect for the job. It’s the only pump that was able to meet the weight restrictions for the suspended slab with maximum reach.”

The 47Z-meter was also chosen specifically for its outrigger configuration, but this unit was selected for its small footprint. It was the largest pump with an outrigger spread that was able to fit on the second specially created platform while still delivering as much reach as possible to cover all sides of the pour.

The First West Credit Union’s regional office was completed in 2020. First West occupies about half of the 130,000-square-foot building, including office space, a fitness center, outdoor patio, and better access to public transit. The rest of the building features retail and additional office space for lease.

As the building transitions from construction project to city landmark, stakeholders are confident it will live up to its original inspiration—an Aesop Fable dating back to 600 B.C. that spoke to the value of togetherness and cooperation: “This bundle of sticks you cannot break, take them singly, with ease, you may break as you please.”

“Putzmeister’s compact outrigger configurations, versatile boom configurations, and low unfolding heights give us a competitive advantage in the Vancouver market,” says Sutherland. “This job would have not been possible without the quality and specifications of the Putzmeister equipment on site.”

Specializing in concrete and material placing equipment for the construction industry, Putzmeister America, Inc. is the North American division of one of the world’s most recognized and respected heavy equipment manufacturers, Putzmeister Concrete Pumps GmbH. For more, visit www.putzmeister.com.