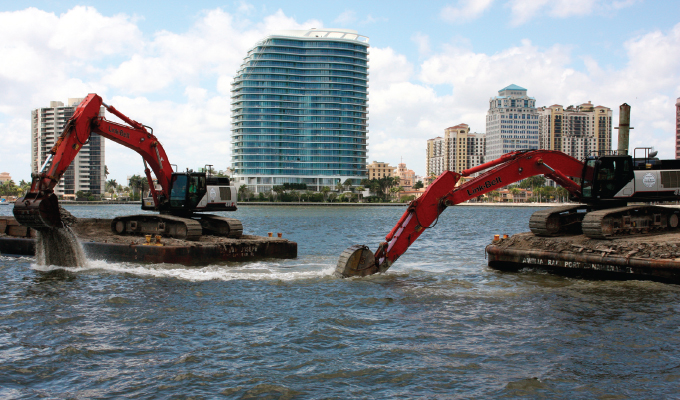 For almost as long as he can remember, David Logan has been involved in construction. The son of Murray Logan, owner of the self-named West Palm Beach-based construction company, he can recall going to one of his dad’s projects as a 10-year-old boy and being responsible for turning on jet pumps for his father and the crew. That gave David a taste for construction that never left him. Today, he and his brother Andy, as co-owners of Murray Logan Construction (MLC) have continued their dad’s commitment to make the company one of the area’s premier heavy marine construction companies. Currently involved in the largest project they’ve ever undertaken—heading up a major upgrade of the iconic Palm Beach Town Marina—the company was faced with a challenge: finding a way to accurately, but efficiently, excavate the floor of the marina basin. It was a challenge that was met with through the addition of GPS-based machine control systems in the pair of excavators performing the work. The solution proved so impactful that, when a subcontractor was brought in to supplement MLC’s fleet, they too, added the system to their machines. Success, it would seem, is contagious.

The $38 million Palm Beach Town Marina Project was approved in response to a call for facilities better equipped to handle larger vessels. Keeping in mind that this is Palm Beach, a city with more than 30 people on Forbes’ list of the world’s richest people, larger vessels meant those 275 feet in length or better. According to David Logan, the trend for marinas like the one at Palm Beach is for bigger vessels, so the town is simply reacting to the demands of the market.

“Before the renovation, there were already yachts over 200 feet that had berthed here, but there will undoubtedly be many more of that size and larger after this is complete,” he says. “It is a tremendous revenue source for the Town of Palm Beach; that was really the driving force behind the upgrade.”

And a significant uptick in revenue it will be. In the past, the Town relied on the marina to pump about $3 million to $4 million into its coffers annually. However, once the new marina opens with its world-class Bellingham concrete floating docks, larger slips and more modern facilities, officials estimate it will generate net annual revenue in the $10 million to $12 million range.

Work on the marina began with the demolition of the three fixed concrete piers—named Brazilian, Australian, and Peruvian Docks—which had come to define the facility. They, along with a new 250-foot dock called the Palm Way Dock, will be rebuilt as concrete floating docks to provide 84 state-of-the-art, expanded and enlarged superyacht slips.

“When we demolished the three piers, we took the resultant 2 million pounds of concrete debris offshore where it was used to construct artificial reefs,” says Logan. “Then, after starting construction of 1,500 feet of new seawall, we prepared to begin the excavation process.”

Excavation of the marina sea floor was dictated by a need to provide 3 additional feet of water depth, deemed ample for mooring larger vessels in the marina. Logan says that the difference between excavating on land and beneath the water’s surface could not be starker.

“On land, you can put stakes in the ground, and you are good to go,” he says. “Out here, where we are dealing with a large site that changes with the tide going one way for 6 hours and then the other way for 6 hours, and water elevations that change by about 2 feet every day, twice a day, things aren’t that easy. So, we needed a way to accurately cut the necessary slopes and various elevations—without seeing them.”

Traditionally for MLC, underwater excavation would have entailed working off a bathymetric survey, followed by locating the barge/excavator to an area where a high spot was identified, then an effort to accurately locate it. Occasionally, they would have to resort to sending divers down to mark an area with a buoy.

“When dealing with 14.5 acres of work area, however, that isn’t very practical—we needed a better approach,” says Logan. “I did some research to see what other contractors in the area were using for land-based excavation work and got good feedback from Steve Eakins of D.S. Eakins Construction. Around the same time, one of our key subcontractors, Marc Kleisley of Burkhardt Construction, happened to be going to a trade show, so I asked him to find out what he could about machine control while there. When he came back, everything seemed to point us toward the Topcon X-53i excavator system.”

The attraction for Logan was the fact that, with the machine control system, his operators could know at all times—even with their bucket 15 feet below the water’s surface—exactly where that bucket was, the depth it was at, and its horizontal and vertical location.

“It gives our operators a level of confidence they’d never had before,” he says. “There is no longer uncertainty about whether they’ve gone deep enough or whether they’ve done an area or not—it’s right there on the screen in the cab.”

Having no prior GPS experience, Logan relied upon Wade Cook and Brent Hays from Lengemann Corporation, their regional Topcon dealer, to get up and running. The combination of Lengemann’s expertise and the inherent ease of use designed into the solution allowed Logan’s operators to be proficient within only a couple of days. “We quickly felt like we’d been using the system for a long time; that helped us a lot.”

Recognizing that it would not be convenient for Logan to check on issues in each operator’s cab while they were working offshore, Lengemann suggested that MLC look into a site management system, the upshot being the company’s purchase of Sitelink3D, also from Topcon.

“This solution gives us a real-time look at what the operators are doing, says Logan. “It also allows us to manage the working surfaces with which they are working and do so from our office or elsewhere using any connected device. That’s valuable because I’m regularly discussing the project with one or more of our operators. With Sitelink3D I can be seeing exactly what they are doing, and we can manipulate settings or manage the work area without the need for me to drive out there, get in a small boat and head out to the barge.”

Logan adds that he also uses the solution to generate a range of different reports, as well to set up multiple tasks for the crews to complete. “For instance, I can grab a bathymetric survey model, insert that layer into their system, and all my operators can see—by color—the areas that they’ve already successfully done as well as any remaining high spots indicated in red. Then, using the system, they can simply go back and quickly address the high spots. That function is just invaluable to us.”

With an eye on the completion date and an unexpectedly high amount of rock being encountered, MLC turned to Vance Construction to augment the existing excavation process. In preparation for making that happen, Brad Albritton and Jim Vance, two of the company principals, met with Logan to discuss the marina project.

“When we met, I showed them the machine control solution and the results we were gaining from it,” says Logan. “Almost immediately, they felt they needed to add it to their fleet as well. Again, working with Lengemann, they did, they’ve loved the results and, because they also do a lot of marine excavation, they see it playing a big role for their future work.”

Rather than being hauled to a landfill for disposal, the more than 90,000 cubic yards of material being excavated from the marina sea floor is both finding new life and playing a key environmental role for the area.

“We’re using that material to build artificial islands and to raise the lagoon bottom elevation for Palm Beach County Environmental Resource Management,” says Logan. “When complete, it will serve as a habitat for both seagrasses and nesting birds. The seagrasses will prove critical for support of the manatee population which, particularly in the winter months, is huge in this area.

“The Town Marina project has presented its challenges along the way but, largely because of the performance of the machine control solution—and my team’s embrace of the technology—we will see a successful, on-time completion and Palm Beach will have a showplace of a marina.”

The Palm Beach Town Marina is slated for a Fall 2021 opening.