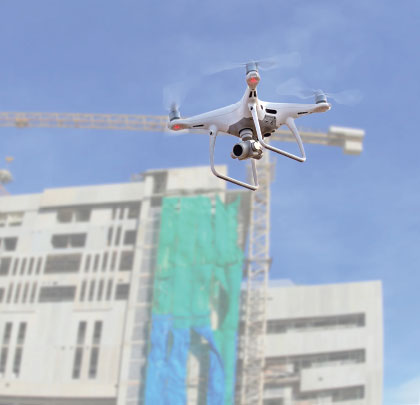 In the past few years, the proliferation of drones has expanded exponentially. Once limited to a casual, amateur pastime activity, the use of drones to complement and enhance professional services has become a big and very real business. Drones, otherwise known as unmanned aerial vehicles, which can be either remote controlled or self-controlled, are widely used in the construction industry for various purposes including but not limited to photogrammetry, safety inspections, and workplace compliance. In order to make sure that drone usage is in line with the parameters and requirements of the construction project as well as to allocate the risk and cost of such usage, it is imperative that construction contracts sufficiently address the use of drones at the outset of work on the construction job.

There are a number of critical issues regarding drone usage on a construction project that must be considered and addressed in the governing documents of a construction job. Liability for the operation of a drone is a number one concern. As helpful as drones might be in providing services on a project, things could go wrong. A drone could be harmful. Improper operation of a drone could cause damage to property. Worse yet, an unskilled or negligent operator could cause injury to a person. Additionally, the operation of a drone without specific knowledge and consideration of the relevant state and local privacy laws could result in potential claims by neighboring land owners. Also, as drone usage is regulated by the Federal Aviation Administration (FAA) rules set forth in the Operation and Certification of Small Unmanned Aircraft Systems, 81 Fed. Reg. 42063, the federal rules also need to be a consideration. While insurance on the project will likely cover some of the key liability concerns regarding the operation of the drone, both owners and contractors would be remiss if liability for drone usage was not directly addressed in the construction contract and jobsite rules.

Next, the cost of the drone must be handled. If the construction contract requires the use of a drone for safety inspections, surveying, or tracking the progress of the project, who is responsible for the costs associated with the operation of the drone? If neither party owns a drone, who pays for the rental of the drone? Is it necessary to hire a professional to operate the drone or does the contractor have someone on its staff qualified to operate the drone? One often over looked issue on the cost side of the equation for the use of drones on a construction project is which party covers the cost of the drone if the drone itself is damaged due to negligent operation or mechanical failure? Drones contain very sophisticated cameras, some equipped with thermal imaging capabilities and the cost of repair or replacement in the event of damage or destruction of the drone can be significant. Addressing the various cost considerations at the outset of the construction project in the construction contract can alleviate issues as they arise as well as avoid potential litigation down the road.

SPECIFIC SCOPE OF USE

A final significant consideration that should be addressed in contract provisions governing drones on a construction project is the specific scope of use of the drone. While this may seem to be an obvious consideration, the manner in which the drone is to be use should be clearly spelled out to alleviate any confusion or worse yet, potential claims.

While there is no doubt that the use of drones on a construction project can enhance the efficiency, profitability, and safety of the jobsite, due consideration to the manner of operation of the drone, the associate costs, and liability in the event of a problem should be specifically spelled out in the governing construction contract documents to protect owners and contractors alike.

Laura Colca is a partner in the law firm Goldberg Segalla, where she is a member of the leadership committee of the Corporate Services and Commercial Litigation practice group. Laura is also a member of the National Association of Women in Construction as well as Professional Women in Construction. Laura has counseled countless clients on all types of business transactional matters including representing owners and contractors on both private sector and public construction projects. She can be reached at 716.710.5840, or lcolca@goldbergsegalla.com.