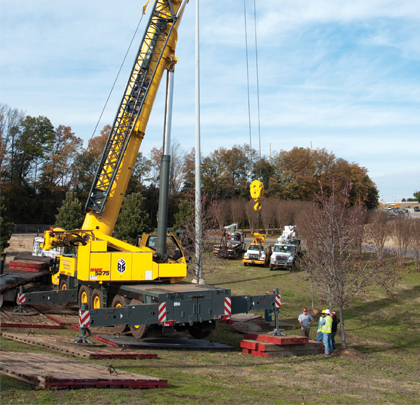 In a recent ACT article, John Schoppert discussed the most common OSHA citations under the new Crane & Derrick standard: Failure to ensure Signalperson is Qualified; Failure to verify Signalperson’s documentation; Failure to ensure Rigger is Qualified; Failure to ensure working radius is not within 20 feet of a power line; Failure to maintain Operator’s Manuals & Load Charts in Crane; Failure to ensure labels are in the original condition as supplied by manufacturer; Failure to ensure annual inspections are performed by a qualified person; Failure to perform Monthly Inspections; Failure to ensure the safety determination is made by a competent person after a deficiency was noted during an inspection.
NBIS has found that the cause of accidents in this niche market has some significant differences from the most common OSHA citations. Therefore, this article will focus on power line contact and the citations related to the failure to maintain a 20-foot working radius from power lines. See 29 CFR 1926.1408 (a)(1).
POWER LINE CORRELATION
It appears the number of OSHA’s power line citations appear to correlate with severity of the harm and the frequency of the incident in the construction industry in general. According to OSHA, fifteen workers die each year from crane contact with power lines. Thus, it appears to be a high priority for OSHA, and the number of power line citations reflects that severity.
Moreover, even historically, power line contact was a focus of OSHA’s citations. For example, according to a September 2006 article, Crane Related Fatalities in the Construction Industry, in the ASCE’s Journal of Construction Engineering & Management, from 1991-2002, 34 percent of crane-related fatalities arose from electrocutions of workers on construction sites. During that same period of time, the number of Serious Citations to the Crane & Rigging Industry was dominated by power line accidents. Prior to the adoption of the new Crane & Derrick standards, more than 30 percent of Serious Citations were for operating proximate to power lines where electrical distribution and transmission are energized. See 29 CFR 1926.550 (a) (15).
For more than 20 years, OSHA’s continued focus on avoiding power line contact is exemplified both by the number of citations as well as the number of Serious Citations under 29 CFR 1926.
POWER LINE CONTACT
While we agree with OSHA’s emphasis on power line contact because of the catastrophic outcomes, neither power line contact nor electrocutions from power line contact is common among the insured with NBIS. We can only surmise that this is because the locations of power lines are being highlighted in prelift meetings, designed around in lift plans, discussed when setting up the cranes, and pointed out by the experienced operators in the seats of cranes.
However, in the Crane & Rigging industry, when power line contact does occur, it often occurs on K rail jobs. Fortunately, power line contact on K rail jobs hasn’t often resulted in fatalities, but it has caused significant property damage to insureds’ cranes and to the surrounding property; and, it obviously has the potential to cause catastrophic harm.
Doing a deeper dive into those K rail accidents, we find a few common patterns. As we all know, many K rail jobs happen at night and on weekends and this seems to impact the cause of the accidents in a myriad of ways. First, it appears many of the operators on these jobs are the lesser experienced operators. Second, the picks are obviously repetitive, and thus it may be that inattention plays a role. Third, fatigue may also play a role as power line contact often occurs near the end of the shift and into the late night/early morning hours. Fourth, because many K rail jobs occur at night, visibility appears to be a contributing factor. Fifth, often this contact occurs when the operator is moving his crane rearward and the power line is not in his view. Finally, almost without exception, power line contact is occurring when the spotter is distracted or isn’t present.
THE TAKEAWAYS
When doing prelift meetings, it’s important to ensure the power line is illuminated by bright lighting to warn riggers, signalmen, spotters, and operators of an upcoming power line. Operators should refuse to move their crane—or even travel to a new position on the K rail job—when their spotter steps away for even a few moments. Reemphasize with operators the import of noting the location of these power lines. Ensure operators have adequate rest before beginning a K rail job. Consider if it’s appropriate to travel with the boom extended when moving across intersections or other spans without K rails. Have operators note on their rental tickets the name of their spotters and signalmen. Discuss proper emergency procedures in the case of a power line contact. Discuss whether it’s appropriate to de-energize lines. Finally, ensure a prelift meeting occurs every day and every shift—even if the K rail job occurs on consecutive days—and especially if new spotters or signalmen are assigned to the task. This takeaway can also be used on any job where the potential for power line contact can be made.
In conclusion, failure to maintain a 20-foot working radius from power lines appears atop OSHA’s citation list, both because of frequency and severity of harm. However, it appears insured in our NBIS program have a better track record of avoiding power line contact than other non-specialists operating cranes. Nonetheless, in the Crane & Rigging industry, there is a pattern of power line contact. We encourage you to discuss the impact of power line contact at one of your future safety meetings. ■
About the Author:
Michelle Lorenz is manager of litigation and claims for NBIS. For more information, visit www.nbis.com.
_________________________________________________________________________
Modern Contractor Solutions, January 2014
Did you enjoy this article?
Subscribe to the FREE Digital Edition of Modern Contractor Solutions magazine.